France’s Oldest Mosque Gets a Facelift 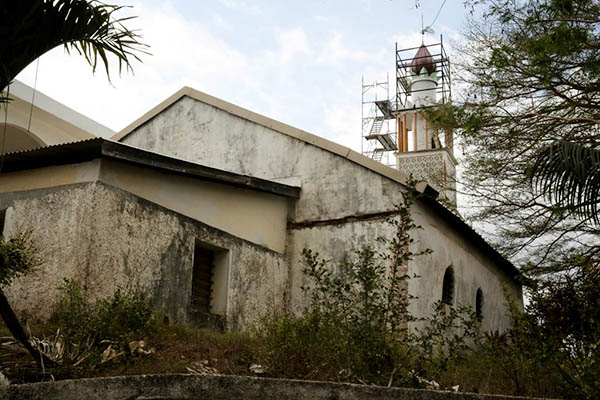 At France’s oldest mosque, a five-century-old edifice on the Indian Ocean island of Mayotte, the sound of jackhammers is broken intermittently by recitals by the faithful hunched over in prayer. The white-and-blue prayer hall at the mosque in Tsingoni, used five times a day, is plagued by crumbling ceilings, leaks, giant cracks and damp.

“The humidity, the dust, the lack of ventilation, I can’t stand it. I’ve developed allergies,” complained Badirou Abdou, a local council representative who has prayed at the mosque since he can remember. Abdou now worships in a temporary prayer hall one floor above the original, which is getting a much-needed facelift along with the rest of the mosque at a cost of some two million euros to the city of Tsingoni and the French state.

The building, perched on an island whose population is 95 percent Muslim, is the oldest working mosque in France and classified as a French Historic Monument since 2016. “The inscriptions on the side of the mihrab [a niche in the wall that shows the direction in which Muslims should pray] say that the mosque was built in 1538 by the sultan Insa,” said Ambass Ridjali, cultural director of the Tsingoni commune, formerly the island’s royal capital. “The architecture of the western part [of the mosque] has remained unchanged since that time.”

Excavations by France’s INRAP national archaeological research institute have revealed that the spot hosted a place of worship already in the 14th century, “which makes it a contemporary of the Notre-Dame in Paris,” Ridjali said.

Outside, workers’ footsteps echo on the steel scaffolding erected around the much-newer minaret, built in 1994 and a historic monument in its own right. It is being repainted, and a new copper dome topped with a star and crescent has just been installed to replace its shattered concrete predecessor, which had been in danger of collapsing.

The work is expected to be completed by the end of 2020. The design of the mosque shows a strong Swahili influence from the East African coast, said Violaine Bressand, an engineer with Mayotte’s cultural affairs agency.

The holy place, in the meantime, is starting to attract visitors—and cash—to Tsingoni. “This contributes to the economic development of our territory while also safeguarding the historical aspect of the mosque,” Ridjali said.

Despite the noise, dust and workmen, worshipper Abdillahi Salim continues to use the original prayer hall. “This is where my father and my grandfather prayed. I do not see myself praying anywhere else,” he said.