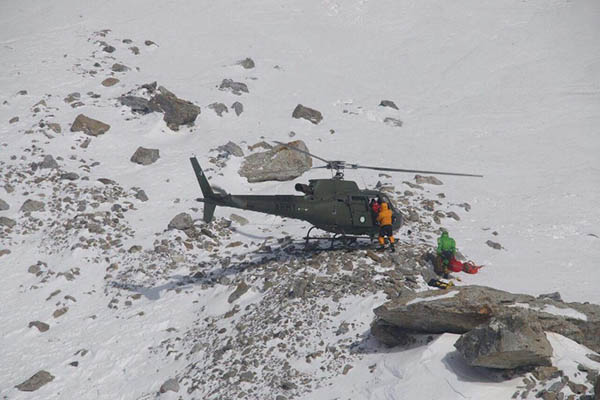 Search called off for second missing mountaineer due to weather, higher altitude putting lives of rescuers at risk

An elite group of climbers saved a French mountaineer in a daring night-time rescue on a Pakistan peak nicknamed “killer mountain,” but officials on Sunday called off the search for a second missing climber.

The team of Polish climbers with support from the Pakistani military launched the attempt on Saturday afternoon to rescue stranded French mountaineer Elisabeth Revol, but were unable to reach Polish national Tomek (Tomasz) Mackiewicz on Nanga Parbat.

“The rescue for Tomasz is unfortunately not possible—because of the weather and altitude it would put the life of rescuers in extreme danger,” wrote Ludovic Giambiasi, a friend of Revol, in a series of updates on Facebook. “It’s a terrible and painful decision.”

The four rescuers were flown by the Pakistani military from the base camp of K2—the world’s second-highest peak—to reach the stranded climbers. They were part of a Polish expedition seeking to become the first mountaineers to summit K2’s peak during the winter, when good climbing days are rare.

“The K2 climbers who stopped their historic effort for a winter K2 summit will descend with Elisabeth Revol—one life saved,” said Karar Haideri, spokesman for the Alpine Club of Pakistan, in a statement on Sunday.

The team was evacuated by helicopter after a five and a half hour descent down the mountain to Nanga Parbat’s Camp One early Sunday. The group was then airlifted by helicopter to a hospital in nearby Skardu, where Revol was set to be treated for a number of injuries.

“[Revol] has frostbite and some [snow] blindness,” said Asghar Ali Porik from Jasmine Tours, who helped organize the K2 expedition. Revol was later flown to Islamabad and admitted to hospital. “Elisabeth is in the hospital in Islamabad. She has severe frostbite on her hands and feet,” Giambiasi said.

Pakistani climber Karim Shah, who was in contact with the expedition, said the rescue effort was unmatched in the climbing world, with the team ascending 1,200 meters in complete darkness along a treacherous route without a fixed rope. “No one did such a climb before,” Shah told AFP. “Most people, it takes two or three days, and they did it in eight hours in the darkness.”

Following the operation the Polish team are set to return to K2 base camp where they will continue their summit attempt. “This operation hasn’t affected the K2 [expedition],” Michał Leksinski, a spokesman for the team, told AFP. “This will go into the history of mountaineering. It was one of the greatest rescue attempts in history.”

The rescue mission was launched after the missing alpinists were located Friday by fellow mountaineers using binoculars, who spotted Revol attempting to climb down while Mackiewicz appeared to be crawling due to frostbite. The pair ran into trouble after making a late descent to a camp on Thursday. They were trapped on the side of the mountain for the night without a tent, battered by frigid temperatures and high winds, said Shah.

Nanga Parbat, in northern Pakistan, is the world’s ninth-highest mountain at 8,125 meters. It earned the nickname “killer mountain” after more than 30 climbers died trying to climb it before the first successful summit in 1953.

The mountain was first summited in the winter in February 2016 by Italian alpinst Simone Moro and his team—Alex Txikon of Spain and Pakistani climber Ali Sadpara—who overcame frostbite and pummeling winds to reach the peak.

In July last year a Spaniard and an Argentinian were presumed dead after they went missing while trying to summit Nanga Parbat.