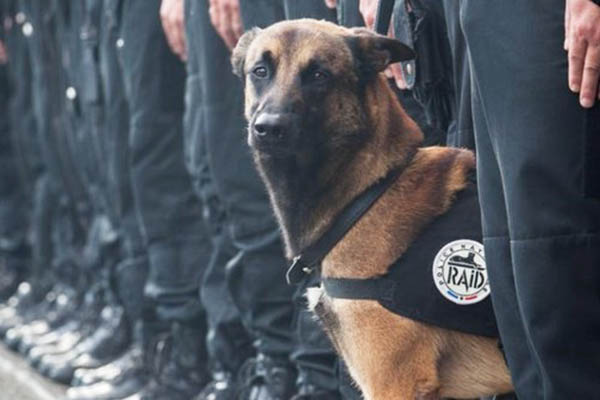 Seven-year-old Diesel was killed by terrorists during a massive security operation.

A French police dog named Diesel was killed Wednesday during a huge security services’ operation against jihadists holed up in an apartment to the north of Paris, police said.

“Diesel, a seven-year-old Belgian Shepherd, a female assault dog … was killed by terrorists during the operation,” according to the Twitter account of France’s police. “Assault and explosives detection dogs are vital in the operations of RAID,” the specialist anti-terrorist unit of the French police which launched the dawn assault targeting the suspected mastermind of Friday’s attacks in Paris.

The hashtag #JeSuisChien (I am a dog) was trending on French Twitter after the announcement.

Two suspected jihadists were killed during the raid, which saw automatic gunfire and explosions ring through the working class suburb since 4:00 a.m. One of them was a woman who detonated an explosives vest.

The operation comes as part of a manhunt to find any links to the devastating string of attacks on Friday that left 129 dead and hundreds injured in a concert hall, bars and restaurants and outside France’s national stadium.

Subsidies Should Not Benefit Elite of Society, Reiterates...