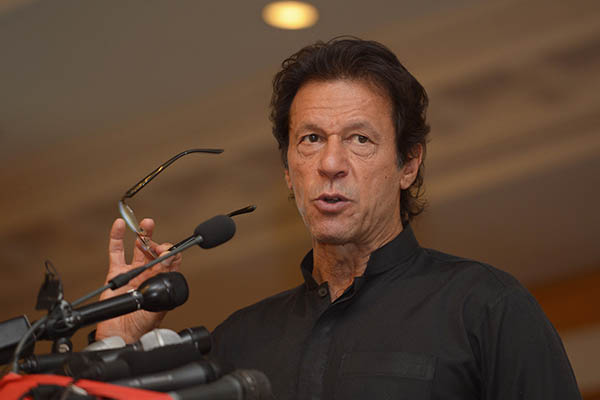 PTI chief claims the 2013 general elections were massively rigged and demands the PMLN government step down and announce new polls.

Former cricket hero turned opposition leader Imran Khan on Tuesday announced he would hold a major protest in Islamabad next week to force the government to step down and hold fresh elections.

Khan, who leads the third largest party in Parliament, has long complained of massive rigging in the 2013 general elections, which saw the country’s first transition of power from one civilian-led government to another.

“For the past 14 months we have taken all legal courses available, but we did not get justice and now we are compelled to come out on the streets,” Khan told a press conference. “On Aug. 14, God willing, we will hold the biggest protest in the history of Pakistan in Islamabad where we will demand another election,” he said. Aug. 14, or Independence Day, marks the date Pakistan was carved out of India in 1947 after the end of British colonial rule.

Foreign election observers announced at the time that the poll had been credible and critics of Khan say his Pakistan Tehreek-e-Insaf (PTI) party should not have accepted their seats in Parliament if they did not believe the vote was fair. Khan’s party also formed a government in Khyber Pakhtunkhwa province, and it was unclear if he was willing to relinquish power there for a fresh poll.

“I could have opted to protest immediately after the May 11 general elections, but I chose not to in light of the economic situation in the country and the prevailing terror threat,” claimed Khan.

During his press conference, Khan claimed he would reveal the names of all the people involved in the alleged rigging at a later date, without giving any more details. The PTI chief said that Afghanistan had agreed to recount the entire country’s votes after presidential candidate Abdullah Abdullah had claimed rigging and demanded Pakistan emulate that example.

A senior PTI official said his party would demand the government provided a deadline to comply with their demands, failing which it would take to the streets once more. The PTI chief said the ruling PMLN had staged similar protests during the previous government, led by the Pakistan Peoples Party. “We favored the [PMLN] government when they protested to restore the sacked judiciary,” he said.

Khan claimed during the press conference that the Aug. 14 “Azadi March” would be the largest in the history of Pakistan. “Over 100,000 party workers have pledged to reach Islamabad via motorcycles,” he said. He also reiterated a warning to the government against placing him under house arrest to avoid the protest. “If you try to place me under house arrest, my party workers will block all roads in the country and bring the nation to a standstill,” he said.

Late last month the government announced the formation of a cross-party committee to suggest reforms to the election process and report back in 90 days. Analysts have said Khan’s movement also risks undermining Pakistan’s fragile democracy and emboldening the Army, which has ruled the country for half its history.

Khan is right but the way he choose absolutely wrong million s of peoples will be disturbed pakistan is a poor country and can’t afford these type of halla gulla he should look to his province and make that province role model for the people of pakistan. So people of pakistan will take his side strongly. I am just a citizen of pakistan. Come to street for electricity gas water access billing judicial injustice health education and control prices of utility items and assure khan sahib each and every single person of the country will be with u. Thanks.