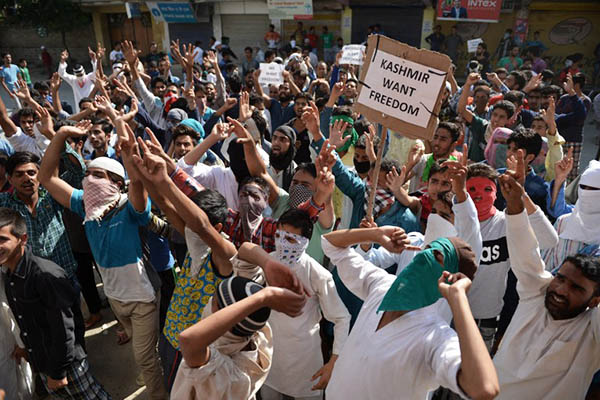 Two protesters dead, raising overall death toll to 54, and over 100 others injured in latest round of unrest.

Fresh protests in India-administered Kashmir on Friday left at least two protesters dead and more than 100 injured, taking the death toll from nearly a month of unrest to 54, a police officer said.

Thousands of residents clashed with government forces, defying a curfew authorities extended to large parts of the disputed territory, including Srinagar, for the 28th straight day.

Government forces fired bullets, tear gas shells and pellets from shotguns to break up demonstrations and thwart a protest march called by separatists opposed to Indian rule. “Forces fired to disperse large crowds at two places in Budgam district in which two persons died,” a senior police officer told AFP on condition of anonymity as he was not authorized to speak to media. “Over 100 protesters [and] some policemen were injured in the daylong clashes,” the officer said.

India-administered Kashmir has spiraled into unrest with almost daily anti-India protests and clashes since the killing on July 8 of popular young rebel leader Burhan Wani in a gunfight with soldiers. The Himalayan territory has remained locked down since then as authorities imposed a rolling curfew, cut Internet services and suspended most mobile networks.

The unrest, the worst since 2010, has left 54 civilians and two policemen dead so far. More than 4,000 people have been injured, many with pellets in their eyes causing partial or complete blindness.

Kashmir has been divided between India and Pakistan since they won independence from British rule in 1947. Both claim the territory in its entirety. Several rebel groups, including Wani’s Hizbul Mujahideen for decades have fought hundreds of thousands of Indian troops deployed in the territory, demanding the region’s independence or its merger with Pakistan.

Rights groups say 70,000 people, mostly civilians, have died in the fighting since 1989 when an armed rebellion against Indian rule began.