From Bogota With Love 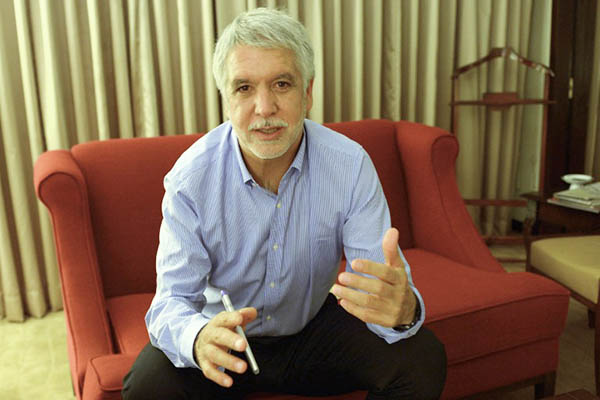 As mayor of Bogota, Enrique Penalosa transformed Colombia’s crime-ridden, traffic-clogged capital and now he is helping sprawling metropolis Karachi as it seeks to shed its violent, chaotic image.

Penalosa is hoping to bring to bear some of the lessons he learned in Bogota as Karachi embarks on creating its first proper mass transport system, the $1 billion Bus Rapid Transit (BRT) network.

Karachi, Pakistan’s main port and economic heart, has seen its population mushroom by more than four percent a year since 1998 and the Asian Development Bank (ADB) says it will top 31 million by 2030. Car and motorbike ownership are booming as the city’s wealth grows, bringing more noise, worse air pollution and longer and longer traffic jams—exacerbated as roads are narrowed by construction work and encroachment.

The city’s rickety, ad-hoc public transport system is struggling to cope—buses make up less than five percent of the vehicles on the road—and Penalosa warns of total meltdown if the right steps are not taken. “You will have 20 times as many cars in Karachi [in the coming years] and Karachi is going to be totally jammed,” he said.

The silver-haired Penalosa transformed Bogota by creating hundreds of kilometers of cycleways and dedicated bus lanes, separate from other traffic, and improving sidewalks for pedestrians. He is passionate about the democratizing effect of proper public transport, giving more room to buses than SUVs.

“This about what kind of society Pakistan aspires to be in the future. It is extremely crucial,” said Penalosa, who is a consultant for the ADB and an advisor to Bahria Town, one of Pakistan’s leading property development companies. “All citizens are equal, the Pakistani constitution says. If all citizens are equal so a bus on which we get 80 passengers has a right to have 80 times more space than a car with one person. This is basic democracy.”

The 10,000 buses the city currently boasts are old and poorly maintained and take up a tiny part of traffic compared with the nearly two million cars and motorbikes on the roads. The BRT system will create five routes through the city where buses will run in dedicated lanes separate from other traffic—a far more effective use of scarce road space in a dense city like Karachi, according to Penalosa.

A similar project has been running in Lahore since early 2013, while another is nearing completion in the twin cities of Islamabad and Rawalpindi, but the Karachi BRT is the most ambitious yet. The 100-billion rupee cost of the five lines will be met through a mix of public and private financing.

The ADB, which is making $100 million worth of loans available, says that as well as reducing pollution and making public transport safer and more efficient, the BRT will also bring an economic boost. Building the infrastructure will provide work for construction companies, existing bus companies will be integrated into the new system and smoothing out traffic bottlenecks will reduce the cost of doing business in the city.

For now the BRT is still at the planning stage and has so far met with little opposition. But Penalosa, who became known in Bogota for virtually “declaring war” on private cars, hiking the tax on fuel and restricting traffic during peak hours, warned tough battles may lie ahead.

“BRT is a very low-cost system, but it is very difficult politically, technically and managerially,” he said. “Politically because you have to take away space from expensive and luxurious cars to give that space to the bus,” he said.

Aside from the benefit of reduced traffic and pollution, Penalosa has urged Karachi to seize BRT as an opportunity to reclaim some of its architectural heritage. One of the proposed routes passes along M. A. Jinnah Road, Karachi’s main traffic artery. Much of the broad boulevard’s elegant 19th and early 20th century architecture has been knocked down during decades of rampant redevelopment and replaced by poorly constructed buildings thrown up at speed.

Penalosa said BRT was a chance to revitalize a road he called “a treasure, a world-class heritage.”

“Billboards have covered the buildings and the jumbles of cables cannot even let anyone see the buildings,” he said, suggesting it could become a pedestrian-only zone. “This project should not only be for transport but it should be good to protect the heritage and recuperate the beautiful buildings that you have.”