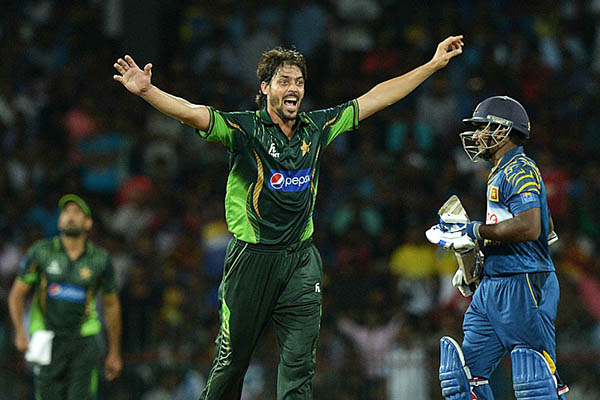 All-rounder Anwar Ali, who once ironed socks for a living as a teenage factory laborer, may have finally found his feet in international cricket after years of unfulfilled promise.

Ali smashed a 17-ball 46 with four towering sixes and three fours to help Pakistan clinch a last-gasp over win in the second Twenty20 against Sri Lanka in Colombo in their recently concluded tour, prompting fans to hail him as the second coming of all-rounder Shahid Afridi.

“I am thankful to Almighty who helped me reach this point,” Ali, 27, told AFP. “My life was once very tough as I used to work in a sock-making factory but I clung to the dream of playing for Pakistan.”

Ali migrated as a child from the small village of Zaka Khel in the militancy-wracked Swat Valley that is also home to Nobel peace prize-winning activist Malala Yousafzai. His family was amongst those who left after Islamist extremists began a campaign to rule the valley under their harsh interpretation of Sharia law.

The family made their base in a rundown industrial area of Karachi, where Ali, who lost his father when he was still young, began working as a child laborer for a meager Rs. 150 per day. “Those were very tough days, we came to Karachi in search of peace and safety and as one of the boys of the family I was required to earn and not play,” said the broad-built Ali.

While on the way to the factory, Ali would watch boys play in the street, spurring his dreams of one day making it to the national stage. “I requested my boss to put me in the night shift so that I could play cricket in the day and he very kindly obliged,” recalled Ali.

Ali got his lucky break when he was spotted by local coach Azam Khan, who he now calls his mentor and guide. “I found him enormously talented and asked him to come for the trials,” recalled Khan. “Initially he excused himself because he would have lost his daily wages in case the trials ran later than scheduled. So, I promised to pay him the Rs. 150 if he comes. The next day he came and he conquered the trials and everyone was amazed at his bowling,” said Khan. “But… I couldn’t keep paying him. Luckily Ali got a job in the Karachi Electric team and from there he never looked back.”

Ali said: “My late father was against my playing cricket but his opinion changed once I made my mark and started earning from it.”

Ali was later picked for the Pakistan Under-19 team which won the Junior World Cup in Sri Lanka in 2006. It was his banana-swing bowling which turned the tables on rivals India in the final at the Premadasa stadium in Colombo.

Defending a paltry target 109, Ali made the ball turn corners as he finished with figures 5-35, shooting India out for 71. His victims included Rohit Sharma, Cheteshwar Pujara and Ravindar Jadeja—all of whom have made their mark for India in international cricket.

Two years later Ali made an inauspicious international senior debut, in a Twenty20 match against Zimbabwe in Canada. Figures of 0-19 in two overs meant he was instantly discarded from the team, which had Abdul Razzaq as its main all-rounder. Cast into the wilderness for the next five years, he made it his goal to lift his family from poverty and build them a modest house.

He set about playing in England’s Lancashire league and all but gave up on his international goals. But finally, his hard work paid off.

“I worked on my bowling, on my batting and, above all, my fielding and that brought me back in the Pakistan team in 2013,” he said.

Ali and Bilawal Bhatti, another promising all-rounder, made their one-day debuts memorable by helping Pakistan record a history-making series win in South Africa in November 2013. But it was the recent tour of Sri Lanka that established Ali’s place in the Pakistan team after years of inconsistency saw his bowling average balloon to 58.

“It would not be wrong to say that Ali has finally come of age on this Sri Lanka tour,” said coach Waqar Younis. “His fielding is extraordinary and he has improved as batsman as well as bowler. If he keeps working hard he will be our main all-rounder.”

For his part, Ali hopes that he can continue to knock the socks off every opponent.