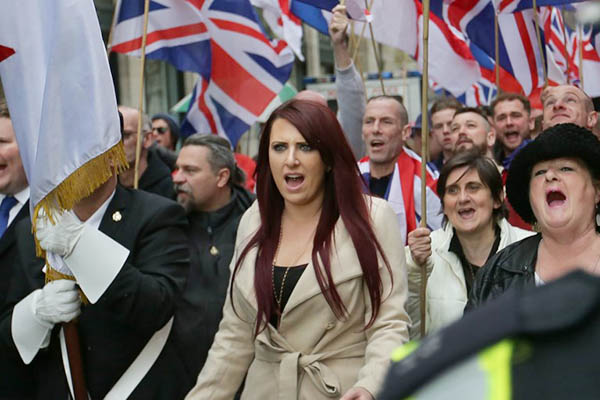 A history of Britain First, the far-right group making headlines thanks to the U.S. president

The group’s rallies typically attract just a few dozen supporters at a time and it gets around the same number of votes in the numerous British and European Parliament elections in which it has fielded candidates. Although small, the group has a wide reach on social media, and has 1.9 million likes on its Facebook page.

While Britain First has not publicly said how many members it has, anti-fascist campaign group Hope Not Hate says it has a membership of around 1,000.

Britain First was founded in 2011 by Jim Dowson, an anti-abortion activist and former member of the anti-immigration British National party. The group wants to ban Islam from Britain and employs tactics such as protests outside mosques or “Christian patrols” in London that are designed to provoke.

It makes use of crucifixes at its rallies and its stated aim is to “restore Christianity as the bedrock and foundation of our national life.”

Fransen, its deputy leader since 2014, was fined nearly £2,000 last year for abusing a Muslim woman wearing a hijab during a “Christian patrol” in Luton, north of London. She is due to return to court in Belfast next month on charges of using “threatening, abusive, insulting words or behavior” after a speech she made at a rally in the city earlier this year.

A trained lawyer, the 31-year-old is a former recruitment consultant and is credited with spearheading the group’s social media campaign.

The organization is led by Paul Golding, a former leading member of the British National Party who ran in the London mayoral elections in May 2016, which were won by Sadiq Khan, a Muslim. Golding got just 1.2 percent of the vote and turned his back to Khan on the podium when the result was announced. The group later tweeted about the result saying: “Islamic extremists not welcome!”

In June 2016, Thomas Mair, a neo-Nazi sympathizer, was heard shouting “Britain first!” as he murdered M.P. Jo Cox in her constituency in northern England.

Some commentators interpreted Mair’s words as a reference to the far-right group. Cox’s widowed husband Brendan was one of the first to react to Trump’s retweets on Wednesday.

“Trump has legitimized the far right in his own country, now he’s trying to do it in ours,” he wrote. “Spreading hatred has consequences and the president should be ashamed of himself.”