Home Lightbox From Geopolitics to Geoeconomics

From Geopolitics to Geoeconomics 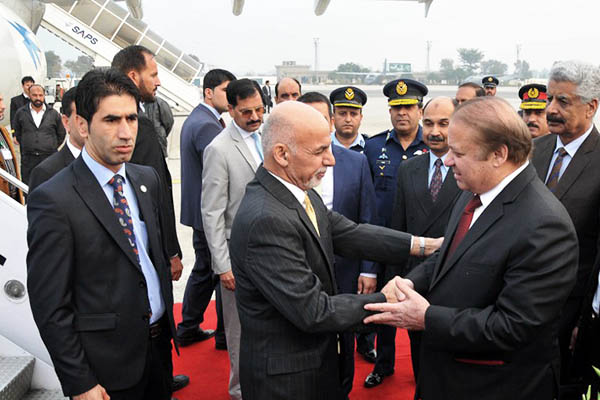 Islamabad needs space for broader engagement with all its neighbors.

Pakistan just hosted the two-day fifth ministerial conference of the Heart of Asia-Istanbul Process. Two positive developments marked the event. India, which, since the coming to power of Narendra Modi had adopted the policy of not talking to Pakistan unless Islamabad accepted its precondition of only talking terrorism, came round to resuming the composite dialogue, now branded as Comprehensive Bilateral Dialogue (CBD). Two, Afghanistan President Ashraf Ghani decided to attend the HOA-IP conference. Until two days before the conference his appearance was unconfirmed given deteriorating relations between Islamabad and Kabul.

As I wrote in this newsmagazine a day before the HOA-IP kicked off, Ghani’s parleys with Islamabad were and are a make-or-break opportunity. At least, as appearances go, the meetings went well. However, the substance will require very hard work on both sides and relates to more than just bilateral arrangements as is clear from the thrust of speeches made by Ghani himself and the foreign ministers of India and Iran.

The HOA-IP’s fifth ministerial had a two-point agenda (the process has six points in all): peace and security, and connectivity, i.e., trade, commerce and investment. On both points, Kabul, Tehran and New Delhi had the same take and all the speeches implicitly blamed Islamabad for non-movement on these two crucial points. This fact can be gleaned from the content of those speeches which is available online.

Regarding peace and security, Ghani wants a reduction in Taliban-generated violence and expects Pakistan to bring the groups to the table. Between now and Spring 2016 when snows melt, there’s a window. Whatever both sides have to do, has to be done in the next 3-4 months. If the 2016 Spring sees a more aggressive Taliban campaign and no talks can be held in the interim to manage violence to some degree, all bets are off.

Kabul knows that and is making space for squeezing Pakistan. For instance, Ghani chose in his speech to talk about hosting on the Afghan soil Pakistanis displaced as a result of Ops Zarb-e Azb. He also mentioned that TTP fighters have taken sanctuaries in Afghanistan and his forces have had to launch multiple operations against them. It was clever and his statement was clearly meant to blunt Pakistan’s allegation that the Afghan intelligence service, National Directorate of Security, is funding and using TTP groups to launch attacks inside Pakistan.

While one assumes that away from the glare of the cameras Pakistan would have informed Ghani of the shenanigans of NDS, upfront what he has said has come on the record and there was no rebuttal from Islamabad’s side.

Expectedly, India’s foreign minister Sushma Swaraj, despite the understanding in Bangkok and the announcement of the CBD, made clear in her speech that like Kabul, New Delhi also believes that Pakistan has to take a mature approach to dealing with terrorist groups and helping ensure regional connectivity, including allowing Afghanistan access to the Indian market.

The question now is whether Pakistan will consider this an attempt by India, Afghanistan and Iran to gang up on it and go into a policy sulk or take up the challenge coldly on the basis of the time-tested principle that interstate relations are not about being fair or unfair and Islamabad needs to break the nexus that puts India, Iran and Afghanistan in the same bloc. For instance, Islamabad has to see why Kabul does not take the same view of Tehran despite the latter’s support and funding for some Taliban groups. The answer: Tehran offers Kabul connectivity with the outside world.

Pakistan, for various reasons, has failed to win over Afghanistan on both counts: peace and security and connectivity. That has to change.

Several steps can be taken toward those two ends and it is for the experts to work out the minutiae. Broadly, however, as I mentioned to the National Assembly’s Standing Committee on Foreign Relations at a public hearing on Oct. 27, 2015, Islamabad needs a paradigm shift focusing on geoeconomics and leverage its geographical location to reconfigure the region’s geopolitics.

This will require developing a mix of supplementary and complementary policies under an umbrella strategy that seeks to take an indirect approach to securing Pakistan’s interests without compromising on its position on various outstanding disputes with its neighbors. The core idea, as I presented it to the Standing Committee in my submission is “that denying India its projection of power does not mean sealing our eastern border and not letting India get access to lands west of Pakistan and north and northwest of Afghanistan. It is about using the leverage of a strategic location to become relevant to and significant for state actors on all sides of our borders. I will call it using power and leverage positively rather than negatively.”

This is precisely the message sent Pakistan’s way at the HOA-IP ministerial. It makes no sense for us to not heed it and continue to insist on relations with the neighbors with a narrow focus instead of making space for a broader engagement.