Home Lightbox From Myanmar to Pakistan

From Myanmar to Pakistan 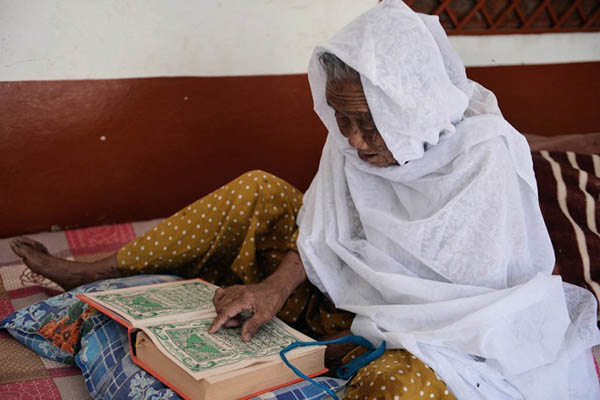 The rustic story of a Burmese woman and the Pakistani soldier she fell in love with.

Ayesha Bibi, in her 90s, no longer remembers her real name, who her father was or much about her hometown in Myanmar. What she does remember is that in the 1940s, as Allied forces fought one of the bloodiest battles of the Second World War against Japanese forces, she fell in love at first sight with a soldier from what is now Pakistan.

Her parents had been buried alive after their house collapsed in bombardments by Japanese forces. Distraught, she left the site and came upon a nearby barracks where she met Sepoy Muzaffar Khan of the British Indian Army, which provided some 2.5 million soldiers for the Allies.

Eventually they married and settled in Dhudial, a village in the heart of Punjab. Khan died a few weeks ago, ending a love story that began in the chaos of war.

“When my parents died during bombardment and nobody was left in my family, I simply walked into the soldiers’ camp and asked Muzzaffar to take me along. Because I trusted him,” Bibi, a small sparrow of a woman with papery skin and cloudy blue eyes, said in fluent Punjabi. “I liked Muzaffar. We initially started communicating in sign language because I didn’t know his language.”

More than 100,000 women, mostly from across Europe but also Asia Pacific, moved to the U.S. as “GI brides” after the war under a new law for military wives. But marriages within Asia between colonial forces and other subjects of the empire were far less common.

Retired General Abdul Majeed Malik, who joined the British Indian Army in 1939 and later served as a government minister, said such cases were exceptionally unusual. “I never heard about any brides coming here with soldiers who went for WWII,” he said. “If any WWII bride from Burma exists here that is an individual case and I must say the most rare one.”

The couple’s love story spanned more than 70 years—a period which saw both Myanmar, then called Burma, win its independence from Britain in 1948 and the birth of Pakistan in 1947. But in Dhudial time seems almost to have stood still.

Arriving a timid young girl, Bibi spent months learning the language and her husband’s religion, Islam, among the shimmering fields. Outside, farmers harvest the golden wheat crop and cattle graze. The tractors roar as they plough the fields around her house and women collect water in a typical rural scene that has been Bibi’s life as the wife of a Pakistani farmer for decades.

“Muzzaffar always wanted me to die in his hands. He did not betray me, it’s God’s order that he has died. It would have been better if I died before him,” she sighed, gazing into the yard, bathed in late spring sunshine.

Muzaffar died almost a month ago, leaving the old woman a small landholding and a heart full of sadness. Her family and neighbors believe she won’t last long. Because they had no children, the property will be divided among Muzaffar’s nephews after Bibi dies. For now she is living in the house of their nephew Sajid Mehmood, whom they were closest to. And she has no fears about the future.

“I will now die with the orders of God in the hands of these relatives, they have taken care of me well,” she said.

Manzoor Hussain, 75 and oldest nephew of Muzaffar Khan, recalls a happy couple who never quarreled during their lifetime. “They loved each other a lot. They lived a very good life, they never quarreled for their whole life,” he said. “After his death, she was crying a lot: ‘Muzaffar Khan, who are you leaving me with? I have nobody here except you’.”

Bibi remembers little of her family or her former life. Only that her mother’s name was Sita and she lived in a town called Meiktila, where her father had a small grocery shop. She remembers going to a temple with her mother. Then there was the bombing and their whole neighborhood was destroyed and many people including her parents died.

“I had left no belongings in Burma. I heard they even killed children. Why should I have gone back there? I asked Muzzaffar to marry again for children, but he never agreed. So this was my fate, our fate. I am happy with it,” Bibi said.

so nice this story allah may grant him to janat