From Rebel to Leader 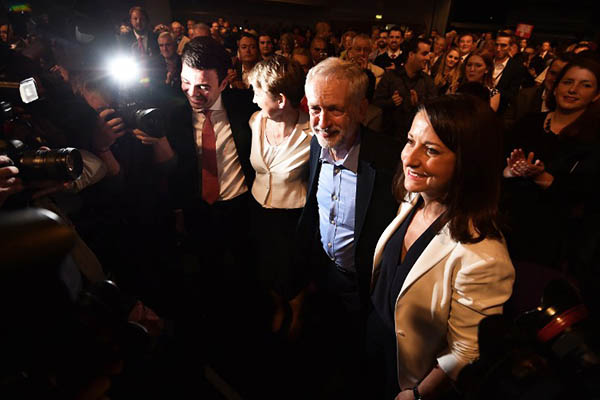 Jeremy Corbyn’s election as leader of the British Labour Party could reshape politics in the U.K.

The veteran socialist’s dizzying ascent has prompted dire warnings from party grandees like Tony Blair that his policies will prove too left-wing to draw wide support from British voters, driving Labour to disaster at the ballot box. But supporters of the vegetarian and keen cyclist say his plain-talking style and anti-austerity policies, which have drawn comparisons to Greece’s hard-left Syriza, will cut through public cynicism about politics.

Asked if he would take the £135,000 annual salary and police protection to which leaders of the opposition are entitled, Corbyn quipped on Channel 4 News: “All those things are up for discussion on Sunday.”

His policy pledges include scrapping Britain’s nuclear weapons, renationalizing some industries such as the railways and involving Hamas and Hezbollah in Middle East peace talks. The 66-year-old, an ardent republican, only stood for the leadership as a wild card following Labour’s weak performance at May’s general election won by Prime Minister David Cameron’s center-right Conservatives and started as 100/1 outsider.

Now he will go head-to-head with Cameron every week at Prime Minister’s Questions, a fiery half-hour session in the House of Commons at which opposition leaders seek to establish their credentials as premiers in waiting.

Corbyn grew up in a political family—his parents met as activists during the Spanish Civil War—and worked for trade unions before being elected to the Commons in 1983. He has never held any major office and was a serial backbench rebel, voting against his party’s line repeatedly and championing human rights and policies to help the poor.

He opposed the now deeply unpopular 2003 invasion of Iraq under Blair, is against Cameron’s austerity measures which have seen deep cuts to welfare and believes “we can learn a great deal” from Karl Marx. So committed is he to socialism that his second marriage reportedly broke up over his opposition to sending his son to a state-run school that selects children by academic ability rather than a school open to all.

While many of Corbyn’s views may be at odds with mainstream political opinion in Britain, that has not dented his support in his inner city London seat of Islington North, where he has won at eight successive general elections. “He’s a dry and wry old leftie, but he’s a nice enough man to have a cup of tea with—and he is completely sincere in his rather eccentric political views,” said Alex Burghart, who unsuccessfully stood against him there for the Conservatives this year.

Despite his low-key style, there was a sense of euphoria around the Corbyn campaign, with thousands packing in to see his campaign rallies and supporters adopting the slogan “Jez We Can”—an echo of Barack Obama’s 2008 presidential race rallying call. But many of Labour’s biggest names, including Blair, have spoken out to make clear they think Corbyn’s leadership will be catastrophic, keeping Labour, last in power from 1997 to 2010, out of office for years more.