by Meggie Morris and Marisa Endicott May 2, 2016 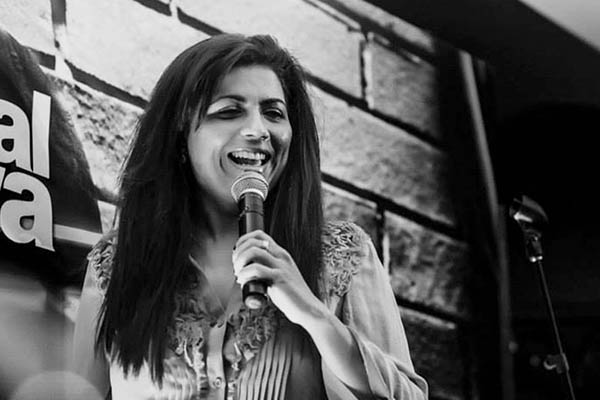 Unexpected players are changing the comedy game in Pakistan.

On a Friday night in Karachi, people of all ages packed into T2F. They lined the walls and spilled onto the floor, filling every inch of space at the small cultural center to watch nine budding comics try their hand at standup. The jokes, offered in a blend of English and Urdu, traversed the landscape of sex and relationships, satirizing age-old questions of arranged marriage and religious conflict in today’s social-media world.

Nida Syed was one of the nine comics at T2F that night. Dressed in a blazer and jeans, she exuded a relaxed confidence and joked about the unusual intersection between attraction and religion to nonstop laughs from the crowd. “I used to dream of standing by the window, looking outside and seeing him going to the nearby mosque in his white shalwar kameez with my father,” Syed said of her eighth-grade crush, the British singer Ronan Keating, and her fantasies of him converting to Islam. “Not just that. I used to look at his milky white ankles visible from his shalwar and his golden beard catching sunlight, spreading light in the entire neighborhood. Such halal dreams.” Syed was a natural. No one knew until her set was done that this was her first time performing in front of an audience.

In Pakistan, where audiences are more familiar with slapstick, standup is transforming the comedy industry, especially by providing a platform to comediennes. Pakistani women are using humor as a vehicle for personal development and advocacy, at home and abroad, despite cultural barriers and social pressures.

“There’s a renaissance of art happening in Pakistan,” said Fawzia Mirza, a Pakistani-American comic who has performed around the world. “You’re seeing people using comedy as a platform in a different way. What’s happening now is a blending of East and West and that helps you potentially reach a wider audience.”

T2F embodies this evolution. The project and venue, committed to social change through the arts since it opened in 2007, hosts events ranging from poetry readings to film screenings and open-mic comedy. Its founder, Sabeen Mahmud, started T2F’s comedy night. She attended Mirza’s first show in Pakistan and encouraged the comedienne to perform an excerpt from her play at T2F and share her Web series exploring sexual identity. “T2F is a great example of giving a space for people to express themselves, whether it’s comedy or any other form of art,” Mirza said. “I would never have thought that that was something that might happen there. But it was amazing. People are hungry for that.”

When Karachi-based writer and director Nausheen Ishtiaq founded the Acting Wheel, an improv cooperative, she didn’t expect it to foster such a strong sense of community. The supportive environment developed naturally through humor, which enabled members to openly explore issues they couldn’t in other settings, she said.

While organizations like T2F and the Acting Wheel are flourishing, women who perform or facilitate comedy in Pakistan still face many barriers ranging from misogyny to violent retaliation. Mahmud was killed by gunmen last year for her years spent fostering social activism through the performing arts. Officials described her killing as an act of terrorism. Performers in Pakistan and those who support them have more to fear than just bad reviews.

“If, God forbid, a debate about religious issues arises, anything you say that goes against what the clerics say is tantamount to blasphemy,” said Minahil Zaman, a doctor by trade but also a member of the Lahore-based production company Theater Hub.

Men can be unapologetically bold while women are chastised for the same behavior. The ingrained patriarchal structure often discourages girls from speaking their minds, says the Acting Wheel’s Ishtiaq. When she uploaded a comedic skit to YouTube that showed her smoking a cigarette, some men left comments like “she looks like a slut” and “she has absolutely no sense of status.” Women “grow up with this invisible eye of society that’s always right there, staring at you,” said Ishtiaq. “And so women just have a filter.”

Improv actor Ayesha Tariq experienced self-doubt when deciding whether to publish her thesis, The Suppressed Anger of the Pakistani Obedient Daughter. The comic graphic novel has since been published by Penguin and has drawn international media attention, recently from Public Radio International. “A lot of us are so dismissive of our own ideas,” she said. “I remember very clearly thinking at that time, ‘who would want to read this? It’s so every-day. It’s so mundane.’”

Some Pakistani-American comediennes who were sponsored by the U.S. State Department to perform in Pakistan said they were keenly aware of the cultural differences between the two nations. When Aizzah Fatima, a New York-based actress and comic, performed her first show in Karachi, she was distracted by the presence of security personnel in plainclothes: “I censored myself because I was kind of worried about my own safety. The play is political, and it is critical of U.S. policy as well as policies in Pakistan, so I just kind of left out a lot.”

Mirza said she censored herself minimally during her own tour and was well received. “It was life-changing for me,” she said. “Just because people are in Pakistan doesn’t mean they don’t accept or don’t want to accept who I am, but people don’t overtly talk about who they are.” Mirza explained that while many are ready to accept atypical identities, they aren’t yet telling their own stories. She is aware, however, that Pakistan’s rules are still very different. While she embraces her Pakistani identity, she knows she is also a visiting American in her parents’ country. She is privileged to be here. She is performing in exclusive places. And then she will leave. “I don’t want to create unsafe spaces for people who bring me in, for the people who have to live with what I did or the stories I told.”

That’s not to say these comediennes aren’t facing barriers in the U.S. Navigating culture and identity is an everyday balancing act for Pakistani women in both countries. While women and minorities have carved out a larger space in the American comedy scene, women still play a proportionally small or token role, and women of color play an even smaller one. “There are all these crazy ideas out there: ‘Women can’t be funny. You can’t be pretty and funny,’” said Fatima. Muslim women are constantly typecast. To add humor, writers want a generic Indian or South Asian accent. In a tragic scene, a woman being abused or killed will invariably be in a hijab, she said. “Let’s move beyond that. We have to portray images of real people. We have a long way to go.”

Performing for the Pakistani-American community brings another distinct set of challenges. Fatima initially encountered reluctance from Muslim-American organizations scared of how audiences would react to her provocative act. “In the beginning it was actually very hard at times to get the Pakistani-American community onboard,” she said. But that’s “really evolved and changed over time.”

Some of the comedians have also faced resistance from their families. When Mirza left her job as a lawyer to pursue acting and comedy fulltime, “there was disappointment—there was a little bit of disappointment and then there was a lot of disappointment,” she said. Mirza’s one-woman play explores her relationship with her mother through their shared love for the Old Bollywood heroine Sharmila Tagore.

Mona Shaikh, dubbed “the naughty Muslim comedian,” moved from Karachi to the U.S. with her family at the age of 15. When she told her parents she wanted to be a performer they gave her an ultimatum: go to college or return to Pakistan to marry. “At 18, I packed my bags and left,” Shaikh said. “I wasn’t gonna let anybody call the shots in my life, not even my own family.” After a long falling out, Shaikh’s mother is now one of her biggest cheerleaders. Last year, Shaikh became the first Pakistani woman to be selected for the Laugh Factory’s “Funniest Person in the World” competition. This is an opportunity Shaikh said she would not have had had she stayed in Pakistan.

American comediennes have more opportunity to pursue their dreams despite any family disapproval. This disparate level of privilege diminishes some of the inspiration Pakistani comediennes can draw from their American counterparts. Comediennes working overseas perform for more liberal audiences while audiences in Pakistan have different expectations, said Theater Hub’s Zaman, who performs mostly in Urdu and Punjabi. “So I’m not wrong when I say it’s only a small amount of inspiration that we can get from comediennes abroad.”

Despite this disparity, comedy is often used by women in both countries to cope with personal struggles. Mirza developed a comedic persona at a young age to connect with others. “Growing up as the only brown kid on the block, in the neighborhood, in the town, in the school, everything’s different. Your clothes are different. Your food is different. Your holidays are different,” she said. “As a way of dealing with being an outsider, you find ways of surviving, and for me it was humor.”

Mirza continues to explore her outsider identity through her work today. In her most recent mockumentary, released in March, she plays the illegitimate daughter of Donald Trump, the billionaire U.S. presidential candidate. “Trump is definitely making America hate again,” she proclaims in the trailer. “I am Ayesha Trump: 50 percent Trump and 1,000 percent American.”

Others used comedy as a means to build self-esteem and overcome insecurities. “I started acting when I was a teenager,” Zaman said of her adolescence in Lahore. “The audience didn’t care about my teeth or my acne; they saw my commitment to the character. It made me accept my flaws and be comfortable with them even onstage.”

For many of these talented women, enacting social change through comedy was unintentional. Their paths led them toward activism because comedy lends itself naturally to social commentary and critique. “I don’t think I ever went into comedy thinking I was there to break stereotypes,” Shaikh said. “However, if through my work I can break stereotypes, then that’s even better.” After her divorce, Acting Wheel’s Ishtiaq realized she could use comedy to explore traditionally off-limits issues. “It was a very interesting way of talking about all these things that society thinks of as taboo and just kind of bringing humor into it,” she said. “It was a very liberating experience.”

Comedic ridicule can also be a breeding ground for relatability and understanding. “Comedy spares no one,” Shaikh said. “There’s a vulnerability to it, and as human beings what connects us the most is the vulnerability in each one of us.”

Fatima discovered this common ground the first time she performed Dirty Paki Lingerie, her play based on a Ghalib verse. A Jewish man approached her after the show in New York City to tell her one of the characters reminded him of his mother; a woman from the Bronx said she also related to the story; and the show resonated culturally with a Japanese-American couple. It was interesting “how these very specific stories of Muslim women in America were transcending cultural and religious boundaries,” she said.

Pakistani females simply pursuing their passion for comedy inevitably make way for change and progress just by defying people’s expectations. “What you’re doing is literally changing the face of a nation,” Shaikh said. “You are literally changing history. You’re making this huge dent that is going to impact the lives of many people, even after you’re long gone.”

Great job with this article ladies!