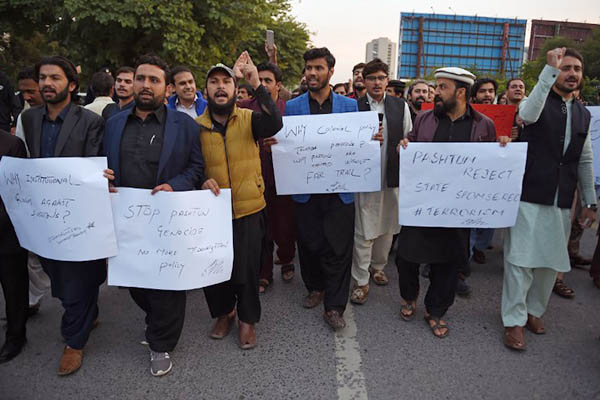 The body of a policeman kidnapped from Islamabad was returned to Pakistani authorities on Thursday, amid protests by ethnic Pashtuns.

“The sad episode of retrieval of the body of SP Tahir Khan Dawar, following his brutal murder in Afghanistan two days ago, ended as an official delegation brought it back today,” the Pakistani foreign office said in a statement.

The officer, Tahir Khan Dawar, had gone missing in Islamabad last month and his dead body was found in a remote area of Nangarhar province of Afghanistan with a hand-written note from the so-called Islamic State claiming responsibility for his kidnapping and death.

Prime Minister Imran Khan condemned the incident and ordered an immediate enquiry into the matter.

The military said in a statement the abduction of the officer and “follow-up behavior of Afghan authorities raises questions which indicate involvement or resources more than a terrorist organization in Afghanistan.”

“We reiterate that Afghan security forces to cooperate in border fencing and bilateral border security coordination to deny use of Afghan territory against Pakistan,” the military said.

Dozens of Pashtun activists staged protest demonstrations across the country demanding an investigation into the brutal murder. Led by a young activist Manzoor Pashteen, supporters of the Pashtun Tahaffuz Movement, accused Pakistan’s military of being an accomplice to the killing.

“How can a senior officer of the police be kidnapped from the federal capital and taken all the way to Afghanistan, it’s a question mark on the performance of the law enforcement agencies,” said Shaukat Khan, a Pashtun activist in Peshawar.

The PTM rose to prominence after the killing of a young social media star in Karachi unleashed festering anger at extrajudicial murders. It has been demanding action—including investigations into disappearances and extrajudicial killings—and an end to what it says is undue harassment of Pashtuns at security checkpoints.

Echoing accusations by Washington and Kabul, PTM activists say the military continues to allow extremists a safe haven from which to launch attacks in Afghanistan, while targeting insurgents that turn their guns on Pakistan.