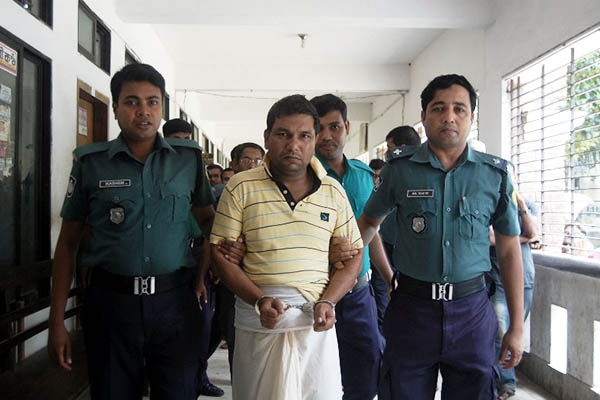 Police escort one of the men linked to the fatal beating of Samiul Alam Rajon. AFP

Authorities say they have already arrested two people in connection with the killing and are searching for four others.

Bangladesh police were hunting a group of attackers Monday who lashed a 13-year-old boy to a stake and then beat him to death, filming the onslaught on a smartphone.

The 28-minute video, in which the boy is seen begging for water as he lays dying in Sylhet, has sparked huge protests in Bangladesh since it was posted online , going viral on social media over the weekend. Police said an autopsy on the boy, named Samiul Alam Rajon, revealed scores of injuries all over his body, including on the head and chest. He died due to internal bleeding.

“Samiul Alam Rajon died on July 8 as a result of merciless beating,” said local police chief Alamgir Hossain. “His body had at least 64 injuries including in the head.”

Police said the attackers tied Samiul, a part-time vegetable seller who dropped out of school to help his impoverished family, to a pole for allegedly committing a burglary—a charge his family vehemently denies. “My son is not a thief. Everyone knows it. I want justice for my child’s murder,” Samiul’s mother Lubna Aktar told reporters.

In the video, the terrified youngster can be heard screaming in pain and repeating: “Please don’t beat me like this, I will die.” Samiul’s attackers can be heard on the footage trying to force him to confess his involvement in the burglary.

At one stage he is told to walk away. But as he tries to get to his feet, one of the attackers shouts: “His bones are okay. Beat him some more.” When the youngster begs for water, his attackers mock him and tell him to “drink your sweat.”

They can also be heard discussing posting the video on Facebook so “everyone can see the fate of a thief.”

Junior home minister Asaduzzaman Khan Kamal said police had arrested two people in connection with the killing and were looking for four others. “They will be arrested and given tough punishment,” Kamal told reporters.

The chief suspect, Muhit Alam, was arrested when he was seen trying to dump Samiul’s body in an isolated area of the city. He was remanded into custody for five days by a court in Sylhet on Monday after police pressed murder charges.

Another suspect was arrested in Saudi Arabian city of Jeddah, where he flew a day after the brutal murder, Bangladesh foreign ministry senior information officer Khaleda Begum told AFP. “We’ll now bring him back to Bangladesh,” she said.

Hundreds of people formed a human chain earlier Monday outside Samiul’s home to protest over the killing, which prompted widespread soul-searching on social media about the prevalence of violence in Bangladesh.