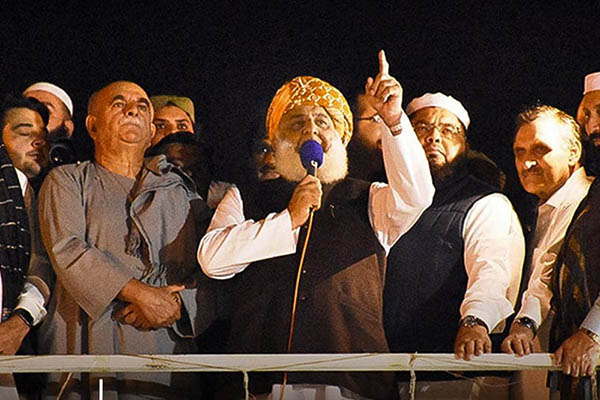 Addressing tens of thousands of supporters who have been camped out in the federal capital for 10 days, Rehman said the struggle to oust the Pakistan Tehreek-e-Insaf from power would continue. “There is a belief that the ‘powers’ support this government,” said Rehman. “Our ongoing protest has negated those views and put them to shame.”

The JUI-F chief said there could be no retreat at this point. “The war will continue. We cannot retreat. All political parties are in touch with us,” he said, adding that the next steps would be taken only after deliberations between all opposition forces.

During his daily speech, Rehman reiterated his criticism of the incumbent government’s handling of Pakistan’s economy. “They have made a mockery of it,” he said. “Wheat production has gone down by 30 percent in the past year; Rice production has declined by 30-40 percent; we only achieved 8 percent of the expected 15 million bales of cotton,” he said, stressing that these were our export crops and were being ignored by the PTI government.

The JUIF chief also lamented the slow pace of FATA’s merger into Khyber-Pakhtunkhwa province. “This government promised to give FATA Rs. 100 billion every year for 10 years, and not a single paisa has been issued yet,” he said, noting that no province was willing to divert from its share of the National Finance Commission award. He said that the PTI had a government in all but Sindh so it was particularly confusing that this had not happened already. “Why are they then not willing to give their fair share?” he asked.

Earlier, Rehman also slammed the Indian Supreme Court’s decision to allow Hindu groups to construct a temple at the former site of the Babri Masjid. “The decision reflects a narrow-mindedness,” said the JUIF chief, adding that New Delhi had failed to protect the rights of minorities.

Separately, Awami National Party leader Mian Iftikhar Hussain alleged to the participants of the Azadi March that P.M. Khan had come into power through rigging. He said the opposition parties were united in demanding Khan’s resignation and fresh elections nationwide.

Pakistan is going through an economic crisis & cannot afford expenses for another election within 18 months. However if Opposition is ready to bear full cost, Govt should consider it with this undertaking that whatever is the result,they will have to accept it for next 5 years.

this is a waist of time by and vision less corrupted Maulana.