G20 Warns Against Slide Into Protectionism 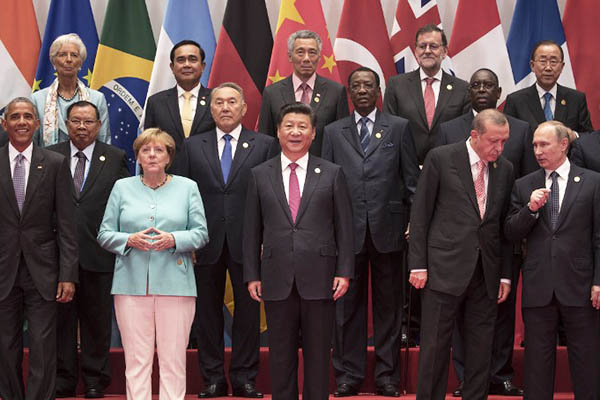 The world’s leading economies spoke out against a return to protectionism and defended the unfashionable concepts of free trade and globalization on Monday, warning the listless global economy needs an urgent reboot.

The G20 summit took place in China with rising populist sentiment discouraging leaders from making difficult commitments, and a stumbling push for a Syria ceasefire and Asia’s territorial disputes intruding on the agenda.

“We have agreed… to support the multilateral trade system and oppose protectionism,” said China’s President Xi Jinping after hosting the gathering in Hangzhou. At the end of the tightly choreographed talks, held in a cavernous complex in a largely deserted city, Xi produced resolutions on combatting industrial overcapacity—particularly in the sclerotic steel sector—and boosting international cooperation on corporate taxation.

But in a communiqué the leaders pointed to a litany of economic ills including financial market volatility, sluggish trade and investment, and gyrating commodity prices. They also turned to the refugee and migrant crisis, calling for the burden to be shared more fairly and for nations to step up their humanitarian assistance.

“Worldwide massive forced displacement of people, unprecedented since the Second World War, especially those generated from violent conflicts, is a global concern,” they said. E.U. President Donald Tusk said in Hangzhou at the weekend that Europe was “close to limits” on its ability to accept more refugees and urged the broader international community not to shirk its responsibilities.

Syria, the source of many of those migrants, was one of the geopolitical issues that swirled around the gathering. The U.S. and Russia tried and failed to strike a deal on stemming the violence in the disastrous five-year conflict, even as a string of bomb attacks hit across the country, underlining the urgency of the task.

“We have had some productive conversations about what a real cessation of hostilities would look like,” U.S. President Barack Obama said after meeting his Russian counterpart Vladimir Putin. But Secretary of State John Kerry and Russian Foreign Minister Sergei could not bridge the divide despite two rounds of diplomacy, and left with only an agreement to meet again in coming days.

“I believe that we are on the right track and could, at least for some period of time, agree to carry out mutual energetic attempts to make the situation in Syria more healthy,” Putin said.

China saw the summit as a showcase for its global leadership credentials, but the Asian giant’s geopolitical trouble spots flared during the gathering. North Korea fired three ballistic missiles into the sea on Monday, South Korea said, in a show of force that collided with the summit.

Beijing is Pyongyang’s main patron and protector but has been either unwilling or unable to rein in its nuclear and missile ambitions that have sent tensions soaring across East Asia and beyond.

There was better news though on another perennial faultline, with Xi and Japan’s Shinzo Abe seeking to reset their countries’ vexed relationship at their first meeting in over a year. Abe called China an “important friend” and Xi suggested they put their troubles behind them, in a sharp departure in tone for the pair, which has been at loggerheads over territorial disputes and historical animosity.

The Group of 20 leading developed and emerging economies represents 85 percent of the world’s GDP and two thirds of its population, and Beijing invested heavily in the high-profile event. It micromanaged every detail, virtually emptying the host city and imposing tight controls on visiting delegations and the press in the hopes of avoiding missteps—measures that backfired at times including a shouting match with White House officials on the airport tarmac which captured headlines.

Despite the staunch defense of free trade, the talks took place amid a perception that the global economic order exemplified by the G20 is not working for ordinary people.

The International Monetary Fund’s Christine Lagarde conceded that globalization “has to benefit all, not a few,” but said that the fruits of a connected world were severely undersold. “That story of benefits of trade, the improvement of productivity, the improvement of choices, the way in which trade has lifted so many people out of poverty,” she said. There was “a determination around the room to better identify the benefits of trade in order to respond to the easy populist backlash against globalization.”

In their communiqué the group resolved to make growth more inclusive, “generating more quality jobs, addressing inequalities and eradicating poverty so that no one is left behind.” And many leaders, alive to the public mood, sounded a note of regret that so many had been left behind in the rush for development.

The world must “do more to ensure that working people really benefit from the opportunities created by free trade,” Britain’s Prime Minister Theresa May said as she worked overtime to start shaping her country’s post-E.U. access to world markets.