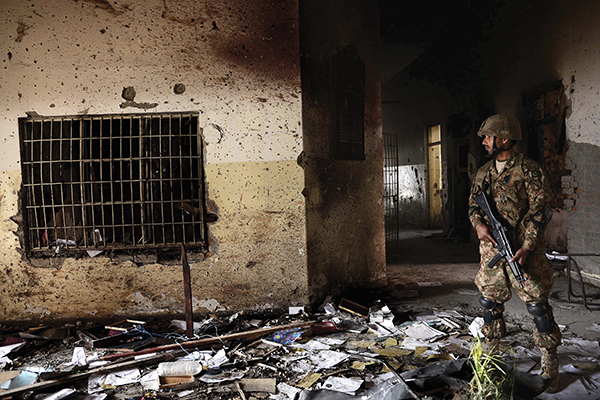 Pakistan’s military has been hit before. Terrorists have attacked the Army’s headquarters, Navy and Air Force bases, buses conveying ISI personnel, garrison mosques, and they have attempted to assassinate two Army chiefs. Since 9/11, the Pakistani Taliban and Al Qaeda have killed at least 15,000 security personnel and 34,000 Pakistani civilians. But for all this, the military has only ever found qualified support at home and virtually none abroad.

With 150 slaughtered, including 134 students, the Taliban siege of the Army Public School on Peshawar’s Warsak Road on Dec. 16 was Pakistan’s worst and most shocking terror attack. This was also the first time that the Taliban specifically targeted families of security personnel.

Post-Peshawar, Pakistan appears a different country. Never before has the consensus against the militants and their apologists—among the politicians, judiciary, media, and within the military—been so pronounced. The outpouring of support, especially from Indians, has been unprecedented and widely appreciated. For now, Pakistanis are united in their revulsion for the Taliban. But once the anger abates, and it will, this grim milestone will likely only prove a game changer for Pakistan’s embattled military.

Pakistan has been unthinking and unkind toward its troops. The legacy of the CIA-backed, Saudi-funded and Pakistan-led jihad against the Soviets has proven hard to shake. Pakistanis, including some in the military rank and file and especially coup-traumatized politicians, blinded also by anti-India and anti-U.S. sentiment, have remained divided over going after “Muslim” terrorists in a war most have chosen, despite the carnage, not to own.

For the military, the course-correction from waging jihad in Afghanistan and Kashmir to confronting the enemy within has been perilous. As Army chief and president, Gen. Pervez Musharraf discovered the limits of his power when he started culling jihadists from the Army. He faced at least two reported and two unreported assassination attempts. The Taliban also tried to get Musharraf’s successor, the self-avowedly “India-centric” Gen. Ashfaq Kayani. Like them, the current Army chief, Gen. Raheel Sharif, has also declared that the real threat to Pakistan comes from within. In June, he ignored the handwringing of Pakistan’s criminally spineless politicians by launching a military operation in the tribal areas. The Peshawar attack was a response to this operation, as was the Wagah bombing on Nov. 2 which killed 55.

General Sharif has every reason to tread carefully. Public opinion is fickle, and radicalization within the military’s rank and file is an open secret, the full extent of which Pakistan cannot acknowledge without causing all-out panic at home and abroad. Most attacks on military installations and personnel have involved insider support, and some of the counterattacks have proven ineffective because the dishonest, denialist national discourse has also infected troops.

On Sept. 6, Pakistan’s Defense Day, Al Qaeda, working with former and serving Navy personnel, attacked PNS Zulfiqar in Karachi with the goal of using the warship to hit India. Until the military came clean with a disturbingly terse acknowledgement of the attack and that too two days later, Pakistani media had dutifully blacked out the episode. In 2007, Musharraf told me that dozens of his troops had voluntarily surrendered to the-then Pakistani Taliban chief, Baitullah Mehsud, in South Waziristan, and that helicopter gunship pilots had refused to fire on assigned targets. To this day, little is known about the court-martial proceedings that followed.

There is no better representation of the Pakistani tragedy than Lal Masjid, the Al Qaeda bastion in Islamabad. In 2007, Lal Masjid made a nuisance of itself when its armed acolytes seized government buildings and started kidnapping people. At the time, the media and Musharraf’s political opposition accused him of putting Lal Masjid up to it so that, they claimed, Pakistan could secure more U.S. funding by dramatizing its internal challenges. As soon as the Musharraf-ordered siege of the “mosque” concluded, the same people turned on him. Iftikhar Chaudhry, the-then chief justice, commanded the state to compensate the “martyrs” of Lal Masjid. Musharraf was accused of “war crimes” and “genocide,” and is currently facing murder cases for the siege. His freedom and life remain in danger. The only other person to remain consistent in the opposition to Lal Masjid was Benazir Bhutto, the former prime minister assassinated by the Taliban in December that year.

With Musharraf and Bhutto in mind, politicians are dependably undependable about their resolve against terrorists. On Dec. 18, citizens protested outside Lal Masjid after its imam defended the Peshawar attack on TV. Instead of blocking the imam from the airwaves or booking him for hate speech or deploying police to ensure the safety of the protesters, the government’s first response was to file cases against the men and women bravely attempting to reclaim space from the terrorists.

It will prove impossible for the military—perpetually run down by politicians, judges, and journalists—to forget or move on from the attack on its children. Peshawar will prompt a rethink within the rank and file, helping end or at least minimize the divisions within, and drive the military to gun for the Taliban and their supporters without any regard for the ever changing mood of the government or Pakistani public. This will not be a bad way to begin honoring those murdered in Peshawar that terrible Tuesday morning.