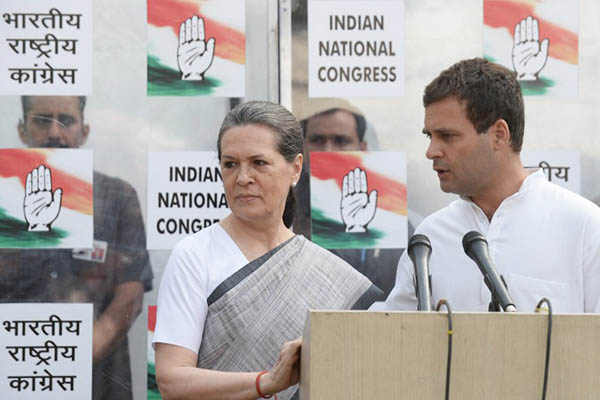 When Indira Gandhi was gunned down by her bodyguards on Oct. 31, 1984, the instant elevation of her son Rajiv to the post of prime minister appeared to confirm her family’s status as India’s natural-born rulers. But three decades on from the assassination of India’s ‘Iron Lady,’ even members of her Congress party are beginning to question whether they may now have to look beyond the Nehru-Gandhi clan for survival.

After a crushing defeat in May’s general elections, things hit a new low this month when Congress trailed in third place in two state polls with Rahul Gandhi, the dynasty’s latest scion, having all but disappeared from view.

“Indira Gandhi was the real architect of the Congress party’s expansion. She had the ability to directly speak to the masses across India and get votes,” said Rasheed Kidwai, who has written several books on Congress. “For the first time, instead of the party depending on the family, the family depends on it for its survival,” he said.

The center-left Congress has ruled India for more than 50 of the 67 years since independence, while a member of the family has been at the helm of the party for all but a handful of those years. Indira’s father Jawaharlal Nehru was India’s first prime minister from 1947 to 1964. Two years after his death, Indira became the premier from 1966 to 1977 and then again from 1980 before a grieving Rajiv then took up the mantle.

Such was the sympathy toward Rajiv that Congress recorded its best-ever showing in elections soon after he took office, reinforcing the notion that the family was destined to rule the world’s largest democracy.

After Rajiv was assassinated in a Tamil suicide attack in 1991, Congress turned to his Italian-born widow Sonia who led the party back to power in a shock 2004 election victory. She declined to become premier, installing the mild-mannered Manmohan Singh instead, but was seen as the power behind the throne until May’s defeat after a lackluster campaign led by her son Rahul.

While few within Congress speak out against the family, analysts say there can be no illusions about the scale of its troubles. “It is defeated and directionless with a serious leadership crisis,” said Zoya Hasan, a professor at Jawaharlal Nehru University in New Delhi.

While Rajiv and Sonia were reluctant leaders, both showed an aptitude for politics that their daughter Priyanka seems to have inherited. Although Priyanka is seen as an alternative leader, she says she is dedicated to raising her children and is hampered by controversy over her husband’s property business dealings.

Rahul—once described in a U.S. diplomatic cable as “an empty suit”—has shown no such appetite and likened power to “poison” before being persuaded to become Congress’s election frontman. His mother remains party president. Since May, Rahul has been barely seen in public and has left Sonia to rally the party.

Hasan said it had been a mistake to think the Gandhi magic could be handed down endlessly, adding: “I think the whole transition from Sonia Gandhi to Rahul Gandhi went horribly wrong.”

For years, it seemed almost unthinkable that anyone but a Gandhi could lead Congress. But asked recently if someone from outside the family could lead the party, former finance minister P. Chidambaram told NDTV: “I think so … some day, yes.”

The party’s plight has added to the nostalgia for Indira even though she was a massively divisive figure, especially after she imposed a 21-month state of emergency. Critics say her authoritarian streak was again illustrated by her order to storm the Golden Temple, the Sikhs’ most revered shrine, in June 1984 when part of the complex in Amritsar were taken over by militants.

After at least 400 people were killed in the assault, two of her Sikh bodyguards took revenge by shooting her dead in her garden.

“She was a very great leader, a world leader, who I saw was respected wherever she went,” said K. Natwar Singh, a former foreign minister who accompanied her on numerous trips. Singh, who fell out with Sonia after being sacked in 2005, sees little chance of any immediate Congress revival.

“Its fortunes are very, very low and have nowhere to go but up, but at this time I don’t see it happening,” he added.

Digvijaya Singh, another Congress veteran who worked with both Indira and Rajiv Gandhi, said it would be a mistake to write off the party but added it was struggling to get its message across. “I am sure we will make a comeback … but one thing that I have been suggesting to Rahul Gandhi and to others in the party is the need to communicate more, and directly, in this age of 24/7 communication,” he said.