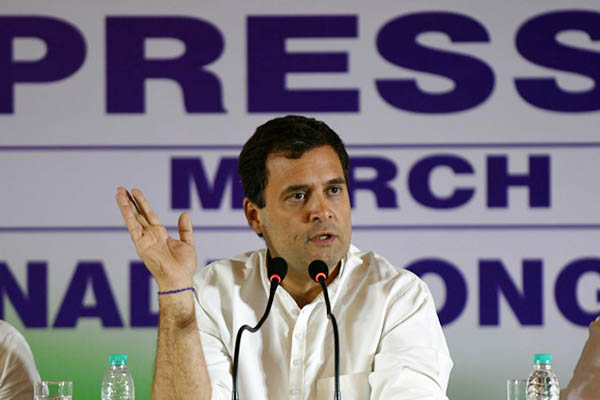 Opposition Congress party unveils 55-page manifesto, calling it ‘the voice of the people’

India’s main opposition Congress party vowed on Tuesday to end abject poverty by 2030, hand cash to 50 million families and tackle the “emergency” of air pollution as it unveiled its election manifesto.

“The manifesto is the voice of the people,” Gandhi, scion of the Nehru-Gandhi dynasty, said at the launch of the “Congress will Deliver” program at party headquarters in New Delhi. “I do not want a single thing in this manifesto that is a lie because we have been hearing large number of lies spoken every day by our P.M.,” the 48-year-old said. Describing unemployment as “the gravest challenge to our country,” the party promised to give the “highest priority to protecting existing jobs and creating new jobs,” helped by the creation of a new Ministry of Industry, Services and Employment.

It also pledged an “ambitious program” of cash transfers of 72,000 rupees ($1,045) to India’s poorest 50 million families, while still bringing the fiscal deficit to under three percent of gross domestic product (GDP) by 2020-21.

The manifesto promised a separate budget to focus on the welfare of more than 260 million farmers in India that have been under severe distress due to falling crop prices, poor yields and crippling loans.

On the environment, the manifesto said it recognized air pollution—22 of the world’s 30 most polluted cities are in India, according to Greenpeace—to be a “national public health emergency.”

“We will significantly strengthen the National Clean Air Program in order to urgently tackle the problem of pollution. All major sources of emission will be targeted, mitigated and reduced to acceptable levels,” it said.

The BJP, which decimated Congress as it swept to power in 2014, is yet to publish its own manifesto.

Modi, 68, has sought in the campaign so far to project himself as India’s “chowkidar” (“watchman”) protecting the country against Pakistan-backed “terrorism,” while also depicting Gandhi as weak. In their most serious standoff in years, New Delhi and Islamabad launched tit-for-tat airstrikes in late February after a suicide bombing, claimed by a militant group based in Pakistan but perpetrated by a local separatist, killed 40 Indian troops in Kashmir.