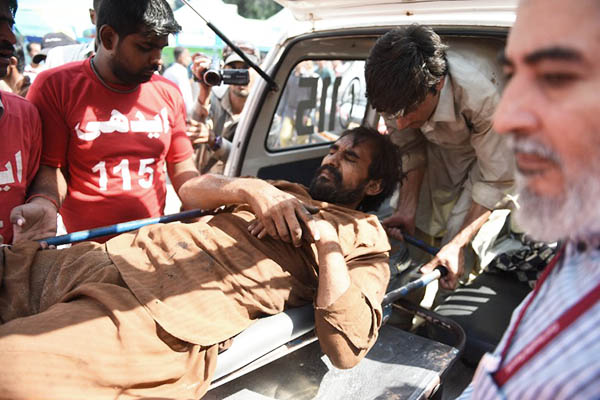 At least five and as many as 40 laborers killed in Balochistan accident.

At least five people were killed and dozens more wounded on Tuesday when a gas cylinder exploded and started a fire inside an oil tanker being broken up for scrap in southern Pakistan, officials said.

The accident happened at the Gadani shipbreaking yard in Balochistan province.

“A gas cylinder explosion caused a huge fire in the ship which was being dismantled. Some 40 laborers sustained burns and at least five have been killed,” Balochistan Home Secretary Akbar Harifal told AFP, ruling out a deliberate attack. Mohammad Hashim, a senior local administration official, confirmed the incident and the casualties.

However, a laborer told Newsweek that the death toll had soared to 40, as it was difficult for rescue workers to reach the site. “I am shocked that officials are claiming only five people are dead,” said Mohammad Ali Baloch, “I saw 35 bodies personally while officials still maintain only five were slain.”

Another laborer, Khan Mohammad, said the force of the blast had blown laborers away from the ship they had been clearing. He said the blaze was still ongoing.

TV footage showed a thick plume of black smoke rising from the ship, which remained ablaze as rescue workers rushed to the scene.

Prime Minister Nawaz Sharif expressed his “deep grief and sorrow” over the incident, according to a statement by his office.

Industrial accidents are common in Pakistan with workplaces often forgoing basic safety measures and equipment in the absence of legislation to protect laborers. A devastating fire at a textile factory in Karachi killed 255 people in 2012.

Dear Prime Minister, condolence message will not stop such incidence, develop some legal instruments on occupational health and safety at work place. Why there has been no law in the country on occupational safety and health at workplace in Pakistan.