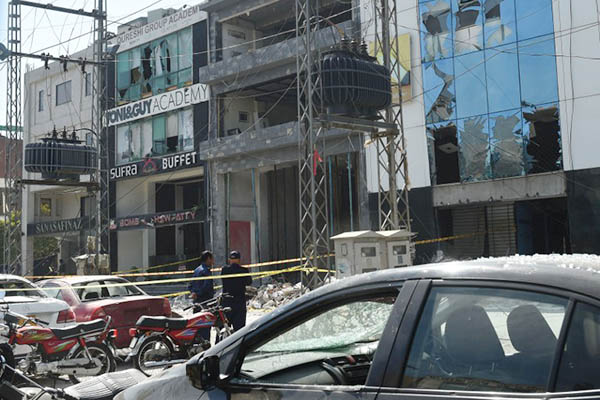 Officials say confusion result of chaos in aftermath of incident.

An explosion that killed seven people and caused panic in Lahore was caused by a gas leak, and not a bomb, as police had earlier stated, officials said on Friday.

The blast on Thursday wounded dozens in the Punjab capital, already on edge after a suicide attack just 10 days earlier killed 14 people, part of a deadly wave of militant violence that has rippled across Pakistan this month.

Multiple police and administration officials had earlier stated on the record that the explosion in a posh area of the city, which blew out windows and crumpled cars, was a bomb. But amid rumors and speculation, authorities revised their assessment at a press conference in Lahore on Friday.

“Yesterday’s explosion was an accident. It was not caused by explosives or a result of terrorism,” Punjab law minister Rana Sanaullah said on Friday. “The presence of gas cylinders and leakage has been confirmed on the site,” he continued. “We got the forensic report this morning and the results and conclusions are that there was no indication of explosives or related materials.”

Debris had blocked the forensics team from accessing the site, he said, while the analysis took up to eight hours.

Sanaullah blamed the confusion on chaos in the aftermath of the incident, and suggested authorities were considering reforming the provincial press department to streamline the flow of verified information.

Thursday’s explosion sent panic through Lahore, where reports of a second blast were quickly debunked. Most schools and restaurants were closed on Friday.

The organizers of the Lahore Literary Festival, the country’s biggest, said it had been scaled back from three days this weekend to just one. “In light of the present circumstances, we feel it’s optimal,” Razi Ahmad, CEO of the festival, told AFP.

The incident also spread panic through social media, where users exchanged dire warnings purporting to be from intelligence agencies. The military later denied issuing the messages. The rumors underscored growing nervousness across the country after a series of assaults shook Pakistanis emboldened by what had been a prolonged lull in violence.

Attacks over the last fortnight include a bomb in Lahore on Feb. 13, which killed 14 people, and a devastating suicide blast at a Sufi shrine in Sindh province that left 90 devotees dead. The incidents, most of which were claimed by the Islamic State group or the Pakistani Taliban, have dented optimism after the country appeared to be making strong gains in its decade-and-a-half long war on militancy.