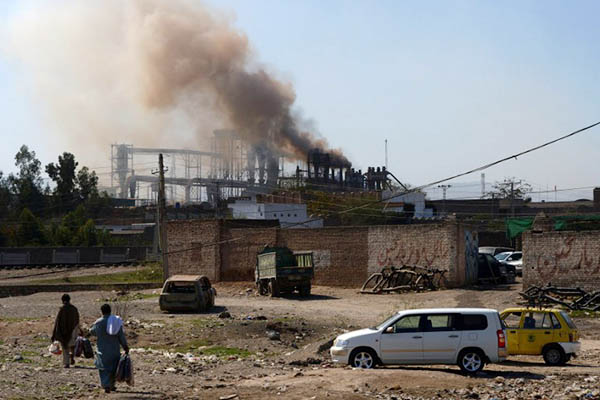 Furhan Hussain moved to Islamabad seeking fresher air, only to find Pakistan’s leafy capital in a semi-permanent haze. Frustrated, he joined a vanguard of citizens monitoring pollution themselves amid a void in government data.

Fast-growing Pakistan is home to some 200 million people and suffers from some of the worst air pollution in the world, thanks to its giant population plying poorly maintained vehicles on the roads and unchecked industrial emissions. Countries such as India and Sri Lanka publish statistics or warnings to help citizens cope when air pollution goes to dangerous levels.

But Pakistan is “one of few countries who do not monitor air quality,” says Hussain, of the informal PakAirQuality network, a group of concerned citizens monitoring pollution in Islamabad, Lahore and Karachi then publishing their data on Twitter.

The lack of official information means citizens may be unaware of what they are breathing in. And without irrefutable data charting the scale of the problem it can be difficult to enforce change.

The issue is acute in developing Pakistan, where emissions standards often go ignored partly because of a belief the country cannot afford to hamper its economic growth, says Imran Saqib Khalid of the Islamabad-based Sustainable Development Policy Institute.

Government policies do not outline a long-term strategy or move towards renewables. Instead, Pakistan is building some 13 coal-fired power plants with Chinese assistance under a $50 billion investment plan. Officials insist these will not affect air quality. “Usage of ultra critical technology has been ensured to reduce emissions,” an official from the Ministry of Climate Change told AFP.

Without data, it can be impossible to prove otherwise.

The situation becomes particularly dire in the north during winter, when cities are blanketed in thick toxic smog reminiscent of Victorian England’s ‘pea-soupers.’

World Bank estimates show that residents of Peshawar, for example, breathe an annual average of 110 cubic micro-meters of fine particulate matter—tiny pollutants that reduce visibility and reach deep into the respiratory tract. That is more than 11 times over the recommended upper limit, and is believed to be a factor in almost 60,000 deaths from related diseases each year, including lung and heart diseases, asthmas and cancers.

“If government is not doing so, citizens themselves have to do it and generate data to show how bad the situation is,” says the activist Hussain.

Ali Nadir, a Lahore-based businessman who is part of the PakAirQuality network, says they use “nodes” which can monitor air quality and share the data in real time through smart phones. The idea originally came from a Pakistani national living in China, who showed his friends the cheap technology.

“The basic purpose is to raise awareness among people about the air quality, because you cannot rely on the government,” Nadir told AFP. “Many people have told me that they follow my tweets about air quality and sometimes if the reading is too high and beyond safe level, they adjust their exercise schedule and plan going out accordingly.”

Nadir said the network hopes to build on the groundswell of awareness.

Meanwhile EPA chief Shah says there is some cause for hope, with a move toward higher fuel standards and the setting of pollution control units in Islamabad factories. “It is a slow process, but it is there.” But exposure remains inevitable for millions of ordinary people.

Walking into a clinic in Rawalpindi, Usman Rehman, 25, complains of a cough he can’t shake. “I live in Rawalpindi and travel on a motorcycle and there is so much pollution that sometimes it is difficult to breathe,” he says.