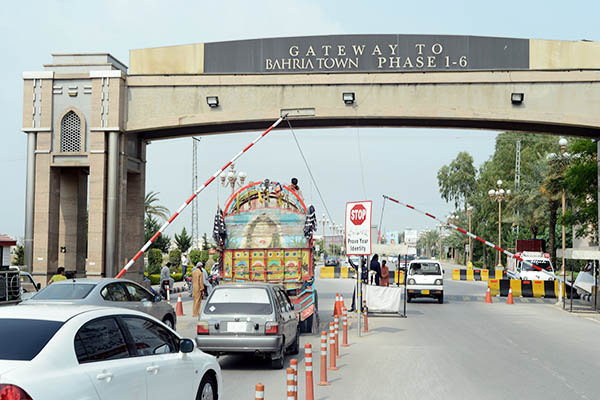 Gated communities in Pakistan provide amenities and safety to the country’s affluent middle class—for a price.

On the edge of Rawalpindi, Islamabad’s congested twin city, a grand arched gateway opens to a rather different Pakistan—one of tidy lawns, golf courses, and constant, reliable electricity.

Welcome to Bahria Town, where Pakistan’s new middle class takes refuge from Taliban attacks and endless power cuts that plague the rest of the country. Cars glide softly over the smooth tarmac carpeting the gentle hills of Pakistan’s largest gated community, past immaculate green verges dotted with statues of cattle—which, unlike their real counterparts elsewhere in the country, pose no threat to traffic.

There’s a horse-riding center, a golf course, a posh cinema, an immaculately air-conditioned café, and a mini zoo with “the only black panther in Pakistan,” whose growling excites young couples taking a walk. Elsewhere, 20-meter models of the Eiffel Tower and Nelson’s Column—complete with lions—watch over this vision of a suburbia that seems a world away from the rest of Pakistan’s seething, traffic-choked and crumbling cities.

For Riaz, an employee of a multinational firm, it is heaven compared to the sprawling, violent metropolis of Karachi that he left a few months ago. An unprecedented wave of murders and kidnappings gripping Pakistan’s economic capital forced him to quit for the quiet comfort of Bahria Town. “Here we have peace, though it’s a bit lacking in life and cafés,” said Riaz, as he walked through the zoo with his young son.

Popularized in the United States in the 1990s, gated communities have spread across the world. They have grown in popularity in Pakistan in the last decade as violence and crime have spiraled and a crippling energy crisis has left people without electricity for hours at a time in the summer. Pakistan now has at least two-dozen gated communities, according to Shaista Zulfiqar of real estate brokerage zeeman.com.

For the residents of Bahria Town and the dozens of other closed communities like it, life passes calmly. Cameras watch over the enclave 24 hours a day, on top of the guards patrolling to kick out interlopers. The power cuts that plague life in the rest of Pakistan are no more than a distant memory thanks to enormous generators. Bahria Town has expanded to three cities—Islamabad, Lahore, and Karachi—housing some 100,000 people in total. When work started on Bahria Town Islamabad in the early 2000s, the area was nothing but “jungle,” said 28-year-old Arif Ali, one of the first residents.

Bahria Town is also a town without a mayor. The development company, founded by businessman Malik Riaz Hussain, sells the land, builds the houses, hospitals, schools, and runs the security, electricity, water, sewage, all in return for a local “tax.”

Bahria Town and its rivals like Gulberg Greens and Khudadad City offer a corner of walled-in paradise—for those who can afford it. “People from middle and upper middle class, including businessmen, government employees and bankers invest in gated communities,” said Zulfiqar. The population also includes members of the Pakistani diaspora who have become rich in Canada, Australia, the U.K., and the Gulf.

Demand has seen prices soar—in 2007 a 200-square meter house in Bahria Town Lahore cost around Rs. 4 million. A similar property in 2012 would have cost Rs. 9 million.  Would-be residents have the choice of buying plots of land or houses of different sizes, with prices running up to Rs. 100 million to Rs. 300 million, according to Bahria Town’s Muhammad Ilyas.

Speculation has also pushed prices up, as property remains a safe haven as the rupee collapses against the dollar. “It’s a very good investment, I have made 300 percent profit since 2007,” said Umar Paracha, who buys and sells Bahria Town plots in Islamabad, though he lives elsewhere. “I am just an investor, I purchase a plot and after two or three months I sell it for a profit of one million or half a million rupees.”

But for most Pakistanis—a fifth of who live on less than $1.25 a day, according to the World Bank—communities like Bahria Town are a distant, impossible dream. At a roundabout facing the entrance to Bahria Town Islamabad, dozens of scruffy men wait for work, squatting on the ground looking at this portal to another world. “It does not seem like Pakistan, it seems like a new country,” said one of them, Haji Gulzar. “The difference is like day and night, black and white, earth and sky.”