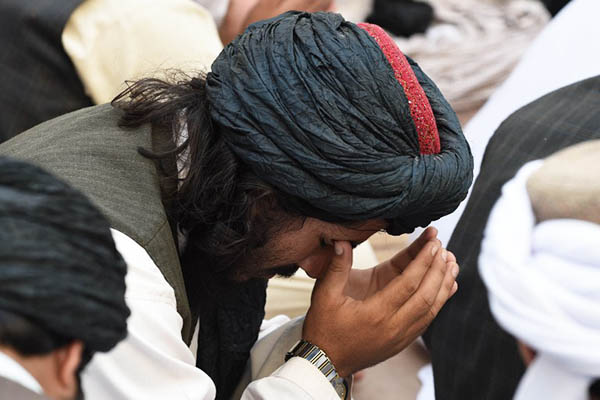 Afghanistan’s spy agency on Monday banned all mourning ceremonies for deceased Taliban leader Mullah Omar, warning that any gatherings condoling his death would be a “legitimate target” for Afghan forces.

The Taliban on Thursday confirmed the death of their one-eyed leader, who led the movement for some 20 years, prompting an outpouring of grief from his legions of loyalists. Monday’s announcement comes hours after Afghan forces reportedly targeted a funeral ceremony in absentia for Omar in the eastern province of Ghazni, killing some insurgents.

“Mullah Omar… was the biggest cause of war and backwardness in the modern history of Afghanistan,” said Haseeb Siddiqui, spokesman for the National Directorate of Security (NDS). “He was responsible for the killing of thousands of Afghans. Any commemoration or mourning ceremonies for him are… an insult to the thousands of martyrs of this nation. The Afghan government has ordered all security and defense forces that such rallies in his support… are a legitimate military target.”

Mohammad Ali Ahmadi, the deputy governor for Ghazni, said the Taliban had organized a ceremony on Monday near the provincial capital. “They asked local residents to provide 3,000 loaves of bread as well as sheep and cows to slaughter. They blocked the main roads and were forcing locals and passersby to attend the ceremony,” Ahmadi told AFP. “Government forces launched an attack, killing at least five Taliban and disrupting the ceremony near Ghazni city.”

A Ghazni provincial council member confirmed the incident, saying a “number of Taliban were killed.”

Such commemoration ceremonies have also been reported in Pakistan. Hafiz Saeed, the head of Jamaat-ud-Dawah, seen as a front for the group behind the deadly 2008 Mumbai attacks, last week led around 1,000 followers in Lahore in “funeral” prayers for Omar, a spokesman for the group said.

The confirmation of Omar’s death ended years of fevered speculation about the fate of the leader, who had not been seen in public since the 2001 U.S.-led invasion of Afghanistan that toppled the Taliban from power.