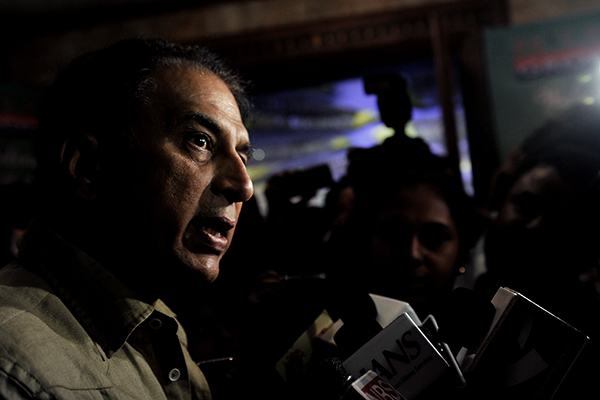 The former captain will head the Board of Control for Cricket in India.

As a record-breaking Test opener and captain of India, Sunil Gavaskar was renowned for his stout defense on even the stickiest of wickets. Now he will have to display the same qualities of defiance and immaculate footwork as he steps to the crease for India’s troubled cricket board.

“As an opening batsman, you must be ready for all kinds of challenges,” Gavaskar said after the Supreme Court recommended he step into the breach at the top of the Board of Control for Cricket in India (BCCI). “I will do everything to the best of my abilities,” he told NDTV.

As the first batsman to score 10,000 in Test matches, Gavaskar’s ability as a cricketer was never in doubt. And after retirement, he has impressed as a television commentator and a strident newspaper pundit. But the 64-year-old is an effective novice when it comes to sports administration and will have to learn fast after being placed in charge of the Indian Premier League, the BCCI’s glitzy Twenty20 tournament tarnished by corruption allegations. (Former Indian Test bowler Shanthakumaran Sreesanth has been banned for life for agreeing to bowl badly in last year’s tournament in exchange for thousands of dollars from bookmakers.)

By the time Gavaskar retired in 1987, he had racked up 10,122 runs from 125 Tests at an average of 51.12 with a then record 34 centuries. But quite apart from the figures, he also earned respect as an opening batsman in the pre-helmet era, tackling fearsome fast bowlers from the West Indies with a near-perfect technique and immaculate defense.

On his maiden tour with the Indian team in 1971, the diminutive Gavaskar amassed 774 runs in four Tests against the West Indies, lifting the nation to its first ever series win in the Caribbean. His last Test innings in March 1987 was one of his finest, scoring a magnificent 96 on a spiteful pitch in Bangalore even though Imran Khan’s Pakistan won the match. More infamously, he once batted 60 overs to score 36 during the inaugural World Cup in 1975, and in 1981 almost conceded a Test match in Melbourne after getting into a spat with Australian umpires.

After retirement, Gavaskar founded a sports management company, Professional Management Group, with close friend Sumedh Shah. He also served as chairman of the International Cricket Council’s cricket committee for eight years before stepping down in 2008 after the ICC asked him to choose between his committee duties and his media role.

Gavaskar has often had to defend himself against accusations that as a commentator contracted to the BCCI, he has chosen to remain silent on some of the biggest controversies swirling around the board. Rather than call at any stage for the resignation of the outgoing board chief over a corruption scandal involving his son-in-law, Gavaskar said N. Srinivasan should be considered “innocent till proven guilty” and any decision to quit “is for him to take a call on.” He said recently: “What may be immoral to one may not be immoral to another, and as long as it is within the framework of the laws that govern our country, nobody should be forced to say or do anything against their will is what I believe in.”

Nevertheless, one of the main figures behind Srinivasan’s downfall gave Gavaskar his seal of approval. “He is a man of integrity and principles,” said Aditya Verma, secretary of the Cricket Association of Bihar and a petitioner in a case against Srinivasan that was brought before the Supreme Court.

Former Test batsman Chandu Borde applauded the fact that such a prominent former player would now have a leading role in administration. “Gavaskar is a man known for playing with the straight bat. There will be a lot of transparency under his guidance,” Borde told the Press Trust of India. “He is known to have his own mind and I don’t think anyone would dare to indulge in corrupt practices with him at the helm.”

Gavaskar lives in his home city of Mumbai with wife Marshneil and son Rohan, also a recently-retired first-class cricketer.