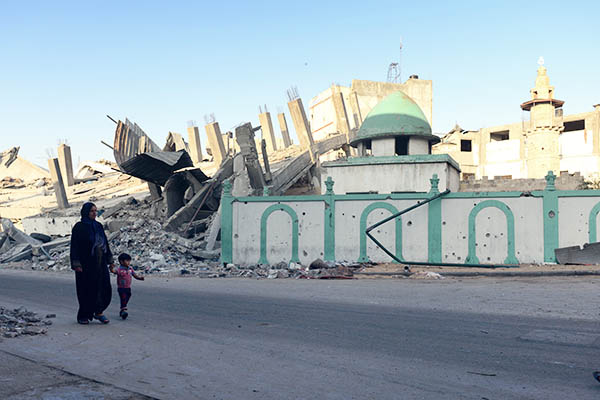 The U.S. has tightened controls on arms shipments to Israel following last month’s military assault on Gaza, according to reports.

A fragile ceasefire extension between Hamas and Israel entered its second day Friday as the two sides in the Gaza conflict ponder Egyptian-mediated efforts to secure a lasting peace.

Egyptian mediators brokered the five-day extension to an existing truce to allow for further negotiations on a long-term ceasefire to fighting that has killed 1,962 Palestinians and 67 people on the Israeli side since July 8. The calm held throughout Thursday, after a flurry of Hamas rocket attacks and Israeli airstrikes the previous night, even if great uncertainty persists on both sides about the future.

As the ceasefire continued, the Wall Street Journal reported Thursday that Israel secured supplies of ammunition from the Pentagon last month without the approval of the White House or the State Department. President Barack Obama’s administration, caught off guard as it tried to restrain Israel’s campaign in Gaza, has since tightened controls on arms shipments to Israel, the newspaper said, quoting U.S. and Israeli officials.

Around 10,000 Israelis poured into Rabin Square in Tel Aviv late Thursday, police said, calling on the government and the army to end Palestinian rocket attacks from Gaza once and for all. It was the first major demonstration in Israel since the fighting began and organizers said it united people across often bitter divides of left and rightwing, as well as religious and secular communities.

“This is a universal principle. We want to live in peace,” Alon Davidi, mayor of the southern town of Sderot, told the rally as Israel’s security cabinet met to discuss the mediation in Cairo. “I have full confidence in the government and in the army, but at the same time I ask as mayor of Sderot that they put an end to this situation once and for all,” Davidi said.

Members of the crowd waved Israeli flags and held up banners calling for peace with the Palestinians and others scrawled with the words: “Occupy Gaza now!”

In Gaza City’s battered Shejaiya neighborhood, Mohamed Ibrahim Aateysh was brewing sweet mint tea inside his destroyed home with his family. “The ceasefire is nonsense. We want stability in the country,” he said wearily.

The Israeli army said six Palestinian rockets struck Israel during the night, including three after the new truce came into effect at midnight. Israeli warplanes hit back with four airstrikes, Palestinian security officials told AFP, saying the skies fell silent at around 3:00 a.m.

The Egyptian foreign ministry said both sides had agreed to extend the ceasefire for five days to allow more time for thorny negotiations. Palestinian chief negotiator Azzam al-Ahmed said the delegations had reached “agreement on many points” concerning the lifting of Israel’s eight-year blockade on Gaza but needed more time to settle a number of remaining disputes.

Israel confirmed it accepted the Egyptian proposal. “We’re honoring the ceasefire and let’s see what Hamas does,” said a senior official.

Israeli negotiators and various members of the Palestinian delegation have left Cairo for consultations with their respective bases and are not expected to return before Saturday night at the earliest. The Israeli security cabinet met on Thursday and discussions were expected to continue on Friday.

Speaking to reporters in Gaza City, Hamas politburo member Khalil al-Haya said there was “still a real chance of reaching an agreement,” but only if Israel “would stop playing with words.”

If observed, the latest truce should herald potentially the longest period of calm in the five-week conflict. An earlier truce collapsed in a firestorm of violence on Aug. 8. Egyptian mediators have proposed that talks on a seaport and airport in Gaza be delayed until a month after a permanent ceasefire takes effect, according to documents seen by AFP.

Negotiations over the exchange of the remains of two dead Israeli soldiers for the release of Palestinian prisoners held by Israel would also be postponed. An Israeli-imposed buffer zone inside the Gaza border would be gradually reduced, and eventually policed by forces under the command of Palestinian president Mahmud Abbas.

Israel has said it will facilitate Gaza’s reconstruction only if the enclave is fully disarmed, a demand rejected by the Palestinians. The conflict has seen a surge in tensions in the West Bank, including Israeli-annexed east Jerusalem.

Police arrested 52 Palestinians in east Jerusalem overnight, taking to more than 600 the number of alleged rioters detained since unrest erupted in early July over the hate killing of a Palestinian teenager by Jewish extremists.