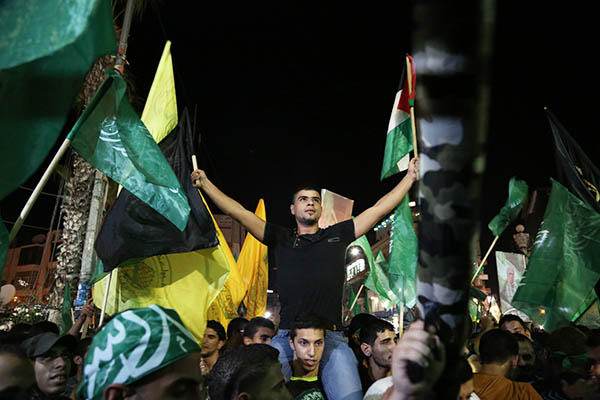 Celebrations erupted in Gaza on Tuesday as a long-term ceasefire agreed by Israel and the Palestinians began, ending 50 days of the deadliest violence in a decade.

The agreement, effective since 1600 GMT, involves an immediate halt to the violence in Gaza that broke out on July 8 and has claimed the lives of 2,143 Palestinians and 69 on the Israeli side. The Palestinians said it was a “permanent” truce, while a senior Israeli official described it as “unconditional and unlimited in time.”

Washington gave its full backing to the deal. “We strongly support today’s ceasefire agreement,” Secretary of State John Kerry said, calling “on all parties to fully and completely comply with its terms.” U.N. Secretary-General Ban Ki-moon also voiced hope that the ceasefire in Gaza will set the stage for talks on a final Israeli-Palestinian peace deal.

In Gaza itself thousands flooded onto the streets in celebration, some firing joyfully into the air, among them gunmen from Hamas, AFP correspondents said. Chanting and clapping they surged through the battered streets, bellowing songs of victory as a man swathed in a huge green Hamas flag threw handfuls of sweets into the air.

Mosques used their loudspeakers to broadcast celebratory chants of “God is greatest” as the war-torn enclave hailed the apparent end to seven weeks of violence that has seen a quarter of the territory’s 1.8 million people flee their homes. “Thank God the war is ended. I can’t believe I’m still alive with my kids!” said 32-year-old Maha Khaled. “It was a very harsh war. I never thought that we would see peace at the end.”

Cars jammed the streets, their horns honking incessantly, as beaming women and children flashed victory signs and crowds of young men bounced up and down on rooftops, waving flags. As night fell, there was no letup in the celebrations as the rhythmic thud of drums beat a celebratory pulse and a performer breathed fire to entertain the ecstatic crowd. “Today Gaza showed the world that it is resisting and that it is stronger than Israel,” said Tamer al-Madqa, 23.

But there was no sign of celebration in Israel as citizens absorbed the news of two people killed when mortar shells hit a kibbutz in the south. Ministers in Prime Minister Benjamin Netanyahu’s cabinet began whetting their political knives after a deal which was reportedly agreed by the premier and his defense minister, with other security cabinet ministers only updated by phone.

News of the agreement first emerged from the West Bank city of Ramallah where a Palestinian official said an elusive deal had been reached over a “durable” halt to the bloodshed. He said the deal involved a “permanent ceasefire” and an end to Israel’s eight-year blockade of Gaza, in a move hailed by Hamas as a “victory for the resistance.”

Ending the blockade had been a key Palestinian demand in earlier, abortive truce talks in Cairo. “The Egyptian initiative [includes] an opening of the crossings for goods and humanitarian and food aid to enter Gaza, as well as medical supplies and materials to repair the water, electricity and mobile phone networks,” said chief Palestinian truce negotiator Azzam al-Ahmed.

Restrictions on fishing would end “immediately” with boats allowed to fish up to six miles offshore with the limit later extended to 12 miles, he said. At a later, unspecified date, the two sides would discuss “the exchange of [Palestinian] prisoners and of the bodies of those [Israeli soldiers] killed” during the conflict, he said.

Israel confirmed the negotiating teams would return to Cairo “within a month,” without saying when. “We have accepted, once again, an Egyptian proposal for an unconditional and unlimited-in-time ceasefire,” a senior official said. “The framework includes an immediate and unconditional ceasefire and then, inside a month, both delegations will be in Cairo raising issues with the Egyptians,” he said. “We will be raising our concerns about demilitarization and preventing Hamas from rearming.”

During the celebrations several senior Hamas and Islamic Jihad figures emerged onto the streets for the first time since the war began, having feared assassination by Israel, which had labeled them “legitimate targets.” As well as rebuilding the battered enclave, senior Hamas official Mahmud al-Zahar said the Islamist movement would continue “arming itself and developing its resistance capacity.”

Egypt’s foreign ministry said the two sides had agreed to the “simultaneous opening of the border crossings between Israel and Gaza to enable the rapid entry of humanitarian aid and relief and reconstruction supplies.” And the statement referred to a “continuation of indirect negotiations between the two sides on other matters within one month of the ceasefire taking effect.”

News of the reported deal came after weeks of Egyptian-led efforts to end the violence that resulted in several short-term ceasefires, all of which broke down in the absence of agreement on a longer-term truce. The latest collapsed on Aug. 19 as hostilities resumed, killing more than 120 Palestinians and two Israelis, one a four-year-old child. There had been no sign of any letup in the fighting earlier on Tuesday, with 12 Palestinians killed in Israeli airstrikes and tank shelling, among them two children.