Home Lightbox Gazing Into the Void

Gazing Into the Void 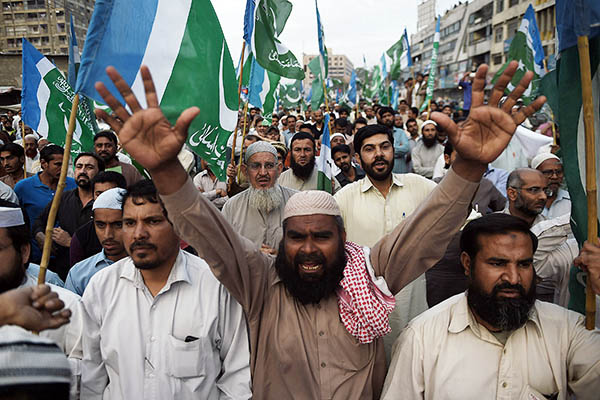 Mumtaz Qadri is dead, hanged by the neck. He is the hero of Barelvis, the largest denomination of the Hanafi fiqh in Pakistan and possibly the subcontinent. At his funeral in Rawalpindi on March 1, the venue was overflowing with people wanting to pay homage to him. There are stories of people who came from other cities and even from the Gulf to be at his rite de passage. Slogans, often abusive, were raised against the prime minister and his government, the higher judiciary and the media.

What are we looking at? Let’s rewind.

Qadri was a policeman, and a member of the security detail of then governor Punjab Salmaan Taseer. A deeply sectarian Barelvi, he was offended by Taseer’s support for Aasia Bibi, a Christian woman accused of blasphemy. Taseer argued in the run-up to his murder that Aasia was wrongly implicated. He also said that the blasphemy laws were abused and must be reformed.

Qadri, like other Barelvis, was terribly offended and angered by Taseer’s vocal opposition to the manner in which these laws have been abused. To the Barelvis, this amounted to blasphemy and, therefore, Taseer was to be killed.

Jamia Naeemia’s Raghib Naeemi has, since Taseer’s murder, tried to “dispel” the impression that the institution issued a fatwa for Taseer’s killing. On one of my programs, however, their ifta head is on record saying they issued the fatwa. The other panelist on that program was Tahir Ashrafi, a Deobandi cleric.

Qadri recited na’ats in uniform and on at least one occasion did so holding his service weapon. He had been cleared by the police high-ups to be on Taseer’s security detail, a terrible choice. According to a senior police officer that I spoke with after Taseer’s murder, Qadri had at least once been brought before a disciplinary committee for indulging in religious activities during active duty hours.

This man, therefore, was primed to do what he did. He performed the deed deceptively, using his service-issue SMG. In other words, he killed someone who he was entrusted to defend with his life. Qadri broke multiple laws because for him, the “religious duty” to kill Taseer trumped any laws or any constitutional framework.

He is not alone in this. Everyone supporting him believes this. Everyone at his funeral would happily take the law into their hands, if not individually then as part of a mob. They would kill anyone accused of blasphemy, or even determined to have blasphemed by legally defending a blasphemy accused (remember the case of Rashid Rehman in Multan) or calling for the reform of blasphemy laws.

Interestingly, the Barelvi denomination with its pirs, mazars, sama’ et cetera—practices considered bida’ by other, more hardline Sunni denominations—have generally been thought of as soft, liminal Islam. The Taliban-Al Qaeda combine and its affiliated terrorist Deobandi (also Hanafi but closer to the Wahhabis in their exegeses) groups are thought of as the modern takfiris (to apostatize).

Not many in the liberal enclave and most definitely not among the United States policymakers know that Barelvis are the original takfiris in the subcontinent. Raza Ahmed Khan Barelvi in his 1906 treatise Husam-ul-Haramain (The Sword of Haramain) apostatized the Deobandi, Ahl-Hadith and Ahmadiyya denominations and, according to one estimate, got signatures of 268 Sunni scholars to confirm his findings and fatwa of apostatization.

In fact, fighting against the Deobandi-Salafi terrorist groups, the U.S., in collaboration with the Pakistani government, secretly funded Barelvi scholars for their fatwas against terror groups. One of the reasons Mufti Naeemi of Jamia Naeemia was killed by a suicide bomber was this Barelvi opposition. Barelvis have always and consistently been vocal against these groups primarily because of denominational differences contained in that seminal work by Raza Ahmed Khan.

Yet, while condemning terror groups for using an exclusionary discourse and apostatizing everyone, the Barelvis have always been trigger-happy when it comes to apostatizing other denominations. After the Ahmadiyya were declared apostates by the Constitution and before the advent of modern Salafi terror, the Barelvis were at the forefront of persecuting the Ahmadiyya. In this, they are also supported by the Shias, themselves apostatized by the Deobandi-Salafi takfiris. After General Ziaul Haq gave teeth to the blasphemy laws, Barelvis have again been the predominant complainants in cases involving blasphemy.

All these denominations like to kill each other. All of them use exclusionary discourses to do that. All of them condemn others for it while stressing that what they hold sacred is the only sanctimonious creed.

At the same time, because the Deobandi-Salafi groups have captured prime political space, they would not want the Barelvis to recapture it. Despite all denominational differences, they will jump on the bandwagon. Exhibit: the shamelessness of Jamaat-e Islami Pakistan.

Take the discourse after Qadri was executed. It is all about manmade vs. God’s laws. There’s much lying and dissembling in how the binary is created and pushed. There is no one God’s law but there are multiple and varied exegeses, depending on which denomination one belongs to. There is also no God’s law that gives anyone the right to be judge and executioner even with reference to someone accused of blasphemy. There is a process and without that process no one can be condemned and executed. But the discourse stops at the charlatan invocation of the bit about God’s law to support mob-lynchings or murder by an individual like Qadri. The fact, however, is that the Barelvi clerics are as enamored of the power they enjoy through these tools as other denominations.

Discourse analysis in such cases becomes crucial to cut through this demagoguery. While the Barelvis will invoke the state and its framework to condemn and denounce the Deobandi-Salafi approaches to apostatization and rejection of the state, one of theirs murdering a man remains a heroic act. At that moment, the state and its laws become a manmade framework which must kowtow to God’s law. In other words, the manner in which the Barelvis conceive of, and interpret, God’s command.

The contradictions are just too many. To not see them requires a mind infused with remarkably low quality and wedded to scarily ill-conceived passion. Logic is defenestrated and non sequiturs abound. The discourse, as set out by the Barelvis, would make for a great course reading on logical fallacies.

Talking to the Wall Street Journal, a 22-year-old student asked: how could an Islamic state kill someone [Qadri] who loved [Islam’s] Prophet so much? Similarly, a lawyer told the same publication that Qadri had no malice; he just loved [Islam’s] Prophet. These sentiments clearly reflect a complete rejection of any legal process and fail to see a murder for what it is: murder. In the court of this “passion”, Taseer was condemned. Nothing else mattered or matters. There are no other angles, no other values, no laws, nothing. There’s just the void.

Into this void we seem to be gazing.

Chilling! It is pulsating, poisonous darkness we stare into. I quote you: “The fact, however, is that the Barelvi clerics are as enamored of the power they enjoy through these tools as other denominations.”
This wold mean Islam is today as a mafia with mullahs of every sect the dons enjoying the right to order the killing of whomsoever they please.