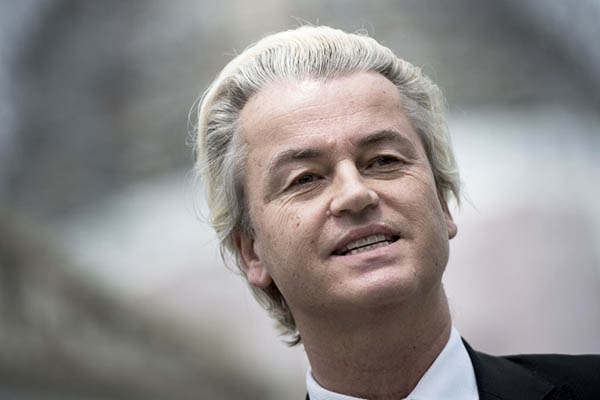 Authorities say Dutch lawmaker’s decision could see his right to airtime suspended for up to four years.

Dutch anti-Islam politician Geert Wilders has vowed to show cartoons depicting Islam’s Prophet on television during time reserved for political parties, after parliament turned down such an exhibition.

Wilders said he would make the broadcast to defend freedom of speech after two militants were shot dead attacking a cartoon contest in Garland, Texas last month.

“The only way to show jihadis that we will never bow for terror and violence is to do exactly that which they try to prevent us to do,” Wilders said in a statement.

Many Muslims find drawings of Islam’s Prophet to be disrespectful or outright blasphemous, and the Dutch authorities said such a move could see Wilders’ right to airtime suspended for up to four years.

Wilders, who gave an anti-Islam speech at the Texas event shortly before the attack, had tried to get parliament to stage an exhibition of caricatures featuring Islam’s Prophet. That was turned down because it did not satisfy the conditions for such an exhibition, including remaining neutral and not being a platform for political views. Therefore, “I will soon show some of the cartoons on national television, during the broadcast slot allowed to my political party,” Wilders said.

The platinum-haired Wilders, whose Freedom Party (PVV) gained popularity in the Netherlands on an anti-Islam ticket, has previously denied that a cartoon exhibition would be provocative.

The Dutch Media Authority provides airtime to parties to make political statements, but said it only looks at the content of the broadcasts after they are shown. “Political parties have airtime to present political information,” said spokesman Rutger Fortuin on Thursday. “We can’t decide in advance if that obeys the law or not, we don’t censor, that would hinder freedom of speech. We can afterwards decide if they’ve broken the law and impose a fine and withdraw airtime for between one and four years,” he said. “For hate-speech, that’s for the judge to decide, if someone files a complaint.”

Ever since forming his own party in 2006, the firebrand politician has been a divisive figure in the Netherlands, which prides itself on its long but fading tradition of multi-cultural tolerance. Wilders himself has no hesitation in branding the Quran as a “fascist” book and has likened it to Hitler’s Mein Kampf.

But the politician is facing prosecution in the Netherlands after a controversial statement last year during local government elections in which he vowed to ensure fewer Moroccans in the Netherlands. Public prosecutors received more than 6,000 complaints of discrimination after television footage in March last year showed Wilders asking party faithful in The Hague whether they wanted “fewer or more Moroccans in your city and in the Netherlands?”

“Fewer, fewer!” the crowd shouted with a smiling Wilders saying: “We’re going to organize that.”