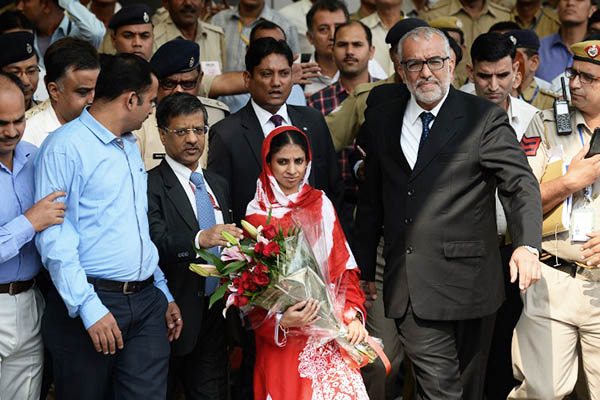 A mute and deaf Indian woman who strayed into Pakistan more than a decade ago finally returned to her home country on Monday to be reunited with the people she believes are her long-lost family.

The young woman, known only as Geeta, smiled as she received bouquets from officials after landing at New Delhi airport escorted by charity workers. “We are elated to meet her. It’s been a long wait. We thank both the countries for their efforts to unite Geeta with the family,” Vinod Kumar, who says he is her brother, told reporters as he waited at the airport to greet her.

Geeta was 11 or 12 when she crossed one of the world’s most militarized borders from neighboring India. She became stuck in Pakistan because she was unable to identify herself or say where she came from.

Now believed to be in her early 20s, Geeta has remained under the care of Pakistan’s largest welfare organization, the Edhi Foundation, living in a shelter in Karachi. Even the name ‘Geeta’ was given to her by Edhi staff.

Her long-awaited return comes after Geeta indicated earlier this month that she recognized a photograph of a family from Bihar sent to her by Indian authorities.

India’s foreign ministry has said she will undergo DNA testing before being handed over to the family, of which Vinod Kumar is a member.

Still, Geeta is confident that the family is hers and has kept their framed photograph in a steel case ever since seeing it. “We want the DNA tests done quickly to end the long wait,” Kumar said.

But questions remain, with the Bihar family saying the daughter they lost was married and had a baby when she disappeared. It is believed Geeta was not yet a teenager when she was found in Lahore by Pakistani police.

Indian authorities have said that if the DNA testing proves Geeta is not related to the family from Bihar, they will place her in a “suitable institution.”

After repeated false leads in the effort to find her family, Geeta’s story received a publicity boost in August when a Bollywood film with a similar plot became a smash hit. Bajrangi Bhaijaan, featuring Indian superstars Salman Khan and Kareena Kapoor, told the story of a young Pakistani woman trapped in India.

The Indian government vowed to bring Geeta home, and authorities found many families who said she could be their daughter.

“We are happy that finally she is going home,” Faisal Edhi, son of the foundation’s founder, told media in Karachi.