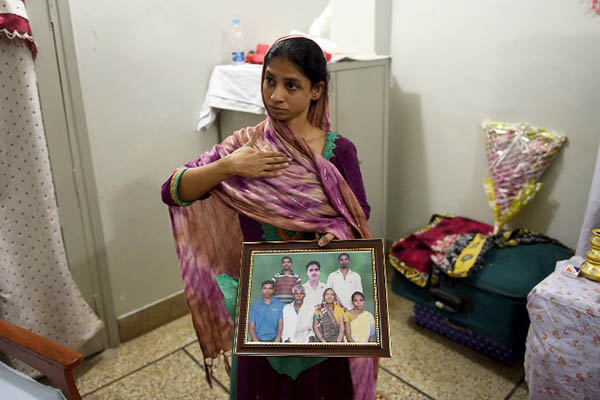 Lost Indian girl hopes to be reunited with her family over 10 years after crossing border into Pakistan.

Accidentally stranded in Pakistan for more than a decade, the young deaf-mute woman shows off a single treasured photograph of the people she believes are her long-lost family in India and who she will soon travel to meet. Known only as Geeta, she has been stuck in Pakistan ever since she wandered over one of the world’s most militarized borders from India more than 10 years ago.

Lost and alone, unable to identify her family or where she came from, she has remained in Pakistan under the care of the country’s largest welfare organization, the Edhi Foundation, living in a shelter in Karachi.

Now—after repeated false leads, and thanks to a Bollywood hit and the single photograph—Geeta believes she has finally identified her family. On Monday, she is set to fly to Delhi, where she hopes to be reunited with her loved ones.

“This is my father, and my younger brother,” Geeta told AFP during an interview in Karachi this week using a combination of sign language and facial expressions as she pointed to the photograph showing the family from the Indian state of Bihar. A woman also shown in the picture is believed to be her stepmother.

Though her eyes glistened during the interview, Geeta appeared calm and confident, expressing no doubt that her family had been found. She even showed off the clothes she plans to wear for the Hindu festival of Diwali in India next month: a scarlet blouse and turquoise ghagra, heavily embroidered.

But questions remain. The unnamed family she has identified claim that the daughter they lost was married and had a baby when she disappeared—but Geeta is believed to have only been around 11 or 12 when she was found by Pakistani police. “She is quite sure about her father and brothers, but she will take a DNA test in India before she is handed over to the family,” said Bilqees Edhi, matriarch of the Edhi family, who fostered Geeta at the foundation’s center for hundreds of abandoned and orphaned children in Karachi.

Geeta, who is believed to be in her twenties, was alone and disorientated with no identity papers when police found her on a train that had crossed the border from India into Lahore. She was thought to have strayed into Pakistani territory by mistake, but could not remember or explain exactly where she was from, and police soon handed her over to the Edhi Foundation.

Even the name ‘Geeta’ was given to her by Edhi staff.

Years slipped by, but her case was given a fresh boost in August after the release of a Bollywood movie that told the mirror image of her story—a mute, young Pakistani woman ends up trapped in India. Bajrangi Bhaijaan, featuring Indian superstars Salman Khan and Kareena Kapoor, became a smash hit. The spotlight returned to Geeta, and the Indian government pledged to bring her home.

Authorities turned up many families saying that Geeta could be their daughter, but she claimed to recognize the family from Bihar, and has kept their framed picture in a steel case ever since.

On Friday, India’s foreign ministry spokesman rejected the suggestion that Geeta’s return had been arranged too hastily, given her ties with the family were not yet established. “Everything we have done so far has been with the full knowledge and concurrence of Geeta and Edhi Foundation,” he told media in New Delhi.

If her DNA does not match that of the family, who have traveled to Delhi specially to greet her, Indian authorities have said they will find a home for Geeta in a “suitable institution.”

Geeta is taking three suitcases with her loaded down with gifts: glass bangles for her stepmother, dried fruits for her brothers, and dozens of pairs of clothes. “We are sad that she is leaving,” Saba Edhi, one of the members of the Edhi family who will accompany Geeta to Delhi, told AFP. “But we are happy that she is going to see her parents and their own people.”