Gen. Bajwa Helped Our Government in its Time of Need: Imran Khan 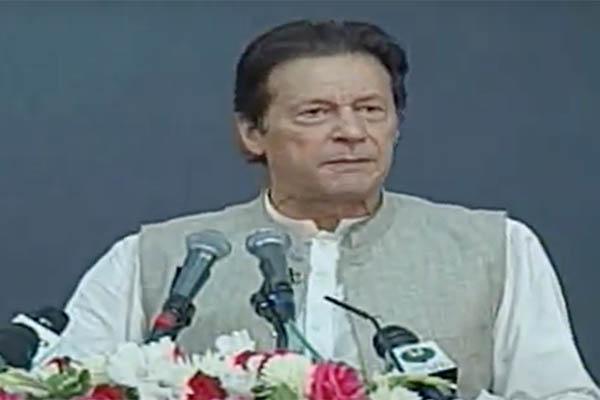 The way in which Pakistan Army chief Gen. Qamar Javed Bajwa helped the Pakistan Tehreek-e-Insaf-led government during its time of need is unmatched, Prime Minister Imran Khan said on Saturday.

Addressing members of the government’s volunteer Tiger Force at Islamabad’s Convention Center, he said that the Army chief had always stood by him. “He helped us in Karachi during rains. He helped us during COVID-19. He agreed to a two-year pay cut [for the armed forces] because Pakistan had no money. He and the Pakistan Army have supported all my foreign policy,” he said, adding that he would not let Pakistan Muslim League (Nawaz) chief Nawaz Sharif cause any rifts between the government and military or within the military itself.

Khan termed the Pakistan Democratic Movement’s Gujranwala rally a “circus,” and said he would not comment on the speeches of Maryam Nawaz or Pakistan Peoples Party Chairman Bilawal Bhutto-Zardari, as “they are children who cannot be leaders because they have never struggled in their lives.”

Deriding Nawaz Sharif, Khan claimed he had never thought the PMLN leader was truly unwell, despite members of his cabinet believing he was on his deathbed. “The language he [Nawaz] used against the Pakistan Army chief and the ISI chief … I want to comment on this,” he said. “No one in the world hates Pakistan more than Modi’s India,” he said. “Every day our soldiers are dying or being targeted in these attacks,” he said, claiming Sharif had been hand-and-glove with the security establishment for years. He also summarized several cases that Sharif has been implicated over the years and reiterated his claims that “these people would sell the country for money.”

Branding Sharif’s speech during the Gujranwala rally an “attack on the Pakistan Army,” Khan took him to task for alleging that Pakistan Army chief Gen. Bajwa and Inter-Services Intelligence chief Lt. Gen. Faiz Hameed had ousted the PMLN government and helped install Khan through a rigged election. “This is the same language that Modi was using,” he claimed, adding the opposition had no right to allege rigging because they had not submitted any petitions for recounts.

“A new Imran Khan is about to enter the field,” he claimed, adding that Parliament would not issue any more production orders for politicians who were imprisoned on court orders. “I want to give a message to the judiciary and NAB [National Accountability Bureau]: people are tired of waiting for justice. They want looted money returned,” he said, promising to provide any logistical support required by Chief Justice Saqib Nisar. “Please conduct daily hearings and finish these cases,” he said.

“All our departments are independent,” he stressed of the judiciary and NAB. “But any departments under my control will be specifically overseen by me now to ensure we capture all corrupt politicians across Pakistan,” he said. Referring to Sharif, he said he knew “the game he was playing” and warned him to stop trying to divide Pakistan.

Khan commenced his speech by welcoming members of the Tiger Force and “thanking them on behalf of the entire nation.” Volunteer forces hold a high esteem in society because their primary responsibility is protecting the rights of the citizens, he said. “You [tigers] have a very important role to play in democracy,” he said, adding that during times of trouble, responsible citizens were always ready to support their government.

Per routine, the prime minister also discussed his fundraising efforts for the Shaukat Khanum Memorial Trust Hospital, saying people like “you tigers” helped it come to fruition. “There is no other hospital in the world that offers free care to so many people,” he added.

Pakistan is one of the 10 worst affected countries due to climate change, said the prime minister, claiming an ongoing wheat shortage was a direct result of it because rains had come at the wrong time and caused losses to crops. Vowing that the country would plant 10 billion trees in 3 years, he said this was merely part of the government’s plans to combat global warming. The government would also work on water treatment and sanitation, which was necessary to prevent water-borne diseases, he said.

“The country has rampant inflation right now,” acknowledged the prime minister. He said this was due to several factors, including a depreciated economy—which he blamed on the previous government—and Pakistan’s massive debt due to the country importing than it was exporting. “Whenever the rupee falls, everything you buy from abroad becomes more expensive,” he said, listing gas, petrol and electricity as some of the utilities affected.

He claimed that the government had imported sufficient wheat to meet demand and blamed hoarding and profiteering for the inflation. “Even Quaid-e-Azam condemned hoarding as a curse,” he said.

“You must not personally interfere if you see any malfeasance,” the prime minister told the Tiger Force, adding that instead they should just take a picture and upload it to the government portal for action by the district administration. “Similarly, you should take pictures of any shops that don’t have advertised rates and send it to us,” he said, claiming this would help determine real stocks of commodities.

“But I stress you cannot interfere in anything yourself,” he said, claiming that if they did, copycats who would seek bribes would emerge and malign the Tiger Force.

On sugar, the prime minister claimed the major problem was that very few, “powerful” people controlled the industry. Referring to the Sharifs and Asif Ali Zardari, he claimed that they had never questioned the sugar mills over their pricing mechanisms. He, conspicuously, did not make any mention of PTI stalwart Jahangir Tareen’s sugar mills. “The plan we are evolving now will ensure that sugar will never be expensive again,” he claimed.

On Oct. 11, the prime minister had posted a tweet announcing he would address the Tiger Force at the Convention Center in Islamabad. “From now till then I want our Tiger Force to regularly check prices of daal (lentils), atta (wheat), sugar, ghee in their localities and post on Tiger Force portal. Will discuss in Saturday meeting,” he said.

The tweet had attracted a lot of backlash on social media and from the opposition, with PPP’s Sherry Rehman questioning under what legal authority the volunteers could go to local markets and monitor prices. Amid mounting criticism, Usman Dar—who heads the Tiger Force in his capacity as Special Adviser to the P.M. on Youth Affairs—has claimed that the volunteers are only serving as facilitators and would not take any action that would be in violation of the rule of law.