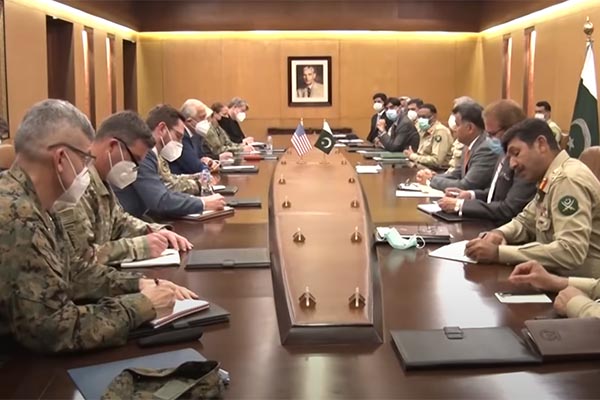 The U.S. Special Representative for Afghanistan Reconciliation, Zalmay Khalilzad, on Monday met Chief of the Army Staff Gen. Qamar Javed Bajwa and discussed matters of mutual interest, according to a statement issued by the military’s media wing.

Khalilzad was accompanied by Gen. Scott Miller, the commander of the Resolute Support Mission in Afghanistan, read the statement. Gen. Bajwa, meanwhile, was accompanied by senior military and intelligence officials, as well as Special Assistant to the P.M. on National Security Moeed Yusuf and Special Representative for Afghanistan Ambassador Mohammad Sadiq.

“Regional security and the ongoing Afghanistan Reconciliation Process were discussed during the meeting,” read the statement issued by the Inter-Services Public Relations, adding that the visiting official had appreciated Pakistan’s role in the ongoing peace process.

The meeting occurred a few days after the Biden administration provided Kabul with a new strategy to achieve a comprehensive ceasefire and advance the flagging peace talks between the Afghan government and the Taliban. According to reports, the U.S. has proposed national elections under a transitional government—a possibility that had earlier been rejected outright by President Ashraf Ghani.

The proposal shared by the U.S. with the Afghan government and the Taliban envisages a “roadmap to a new, inclusive government,” as well as outlining terms for a permanent ceasefire. Taliban spokesman Mohammad Naeem has confirmed that the group has received the proposal, noting that it is deliberating its response.

A letter written by U.S. Secretary of State Anthony Blinken to Ghani was made public over the weekend, outlining a four-point plan for an end to the Afghan conflict. The bluntly-worded letter made clear that if the U.S. were to fully withdraw from the conflict—while still providing material support to the Afghan armed forces—the Taliban could make “rapid territorial gains” and regain control of large swathes of the country.

Warning that the U.S. had not completely dismissed the possibility of a full exit by May 1—as agreed upon during negotiations last year—Blinken said that the U.S. wanted a U.N. sponsored meeting of foreign ministers of Pakistan, Iran, Russia, U.S., China and India to adopt a “unified approach” on Afghanistan. He also urged Ghani to develop consensus in Afghanistan on negotiations with Taliban on “governance, power sharing, and essential supporting principles.”