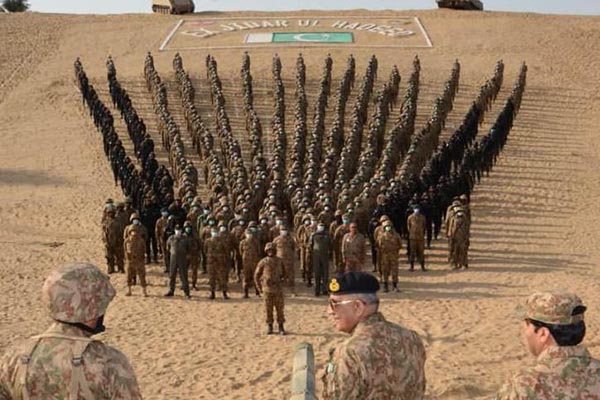 During a visit to Thar Desert, where he witnessed the ongoing training exercise Jidarul Hadeed, Chief of the Army Staff (COAS) Gen. Qamar Javed Bajwa on Monday expressed his complete satisfaction over operational preparedness and combat readiness of the formation.

According to a statement issued by the military’s media wing, Jidarul Hadeed is designed to test the operational capability of field formations in near-battlefield environments. “Jidarul Hadeed involved integrated maneuvers of infantry and mechanized forces in a defensive role,” read the Inter-Services Public Relations (ISPR) statement.

The Army chief was briefed by the exercise commander on the aim and objectives of the ongoing training to ensure complete dominance of the battlefield. He was informed that troops have been undergoing this exercise under strenuous field conditions for over two weeks. It would culminate on Feb. 28.

Gen. Bajwa stressed that vigorous training and the highest standard of preparedness in peacetime were the only guarantors of peace.

Upon his arrival, the COAS was received by Corps Commander Lt. Gen. Nadeem Ahmed Anjum.