Gen. Bajwa Thanks China for Helping Pakistan in Fight Against COVID-19 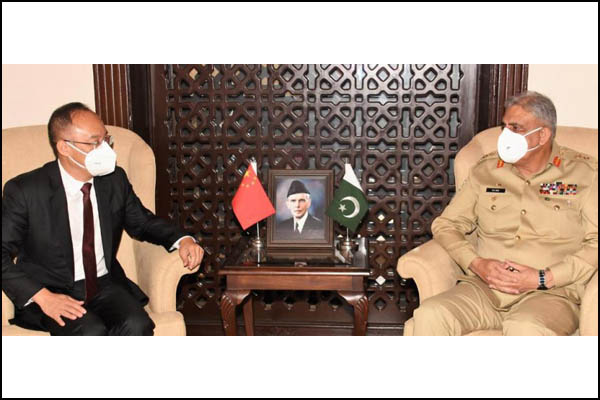 During meeting with Chinese envoy, Pakistan Army chief stresses that Islamabad greatly values its ties with the neighboring nation

Pakistan Army chief Gen. Qamar Javed Bajwa on Wednesday assured Ambassador of China to Pakistan Nong Rong that Islamabad greatly values its ties with “iron brother” China, and thanked Beijing for helping Pakistan in its fight against the coronavirus pandemic.

A statement issued by the Inter Services Public Relations (ISPR), the military’s media wing, said that the Chief of Army Staff (COAS) met the visiting dignitary at General Headquarters in Rawalpindi. It said that the two dignitaries had discussed matters of mutual interest, progress on the China-Pakistan Economic Corridor, and the regional security situation, including the latest developments in the Afghanistan peace process, during their meeting.

The Army chief also thanked the dignitary for China’s contribution toward the fight against COVID-19 and for donating vaccines to Pakistan to help its fight against the pandemic. He stressed that Pakistan greatly values its friendly relations with “iron brother” China.

Gen. Bajwa also congratulated the envoy on Beijing commemorating 70 years of diplomatic ties with Pakistan with a grand ceremony in the Chinese capital.

According to ISPR, the visiting dignitary appreciated Pakistan’s sincere efforts for bringing peace and stability in the region, especially the Afghan peace process.

The Army chief has ramped up his meetings with foreign dignitaries in recent weeks, having met U.S. Charge d’Affaires Angela Aggeler, and the Afghan leadership in the past month to discuss progress of the peace talks between Kabul and the insurgent Taliban. According to a report published in The New York Times, he also met the CIA chief recently while the latter was on a “secret” visit to Pakistan, during which the two discussed the potential of Washington utilizing military bases in Pakistan for counter-terrorism operations in Afghanistan. The report noted that the talks had ended in impasse with Islamabad maintaining that it would not allow its soil to be used to stage any military strikes on a foreign country.