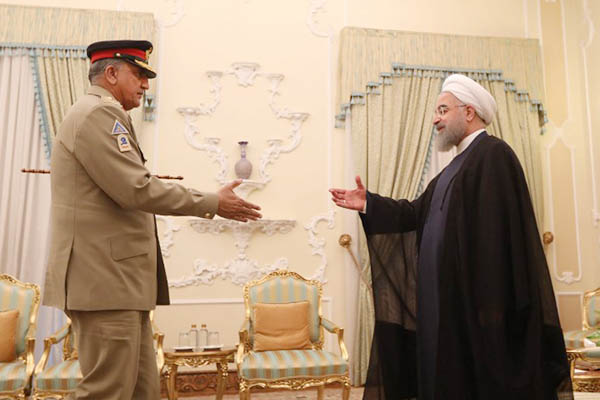 Chief of Army Staff General Qamar Javed Bajwa visited Iran earlier this week and met its civil and military leadership to receive tributes for the war waged by the Pakistan Army against terrorism. He brought up “geostrategic environment, defense and security, and economic cooperation at bilateral and regional level” with the Iranian leadership. It was not a routine visit because it was clearly meant to break Pakistan’s isolation westward and because Iran is deeply involved in infrastructural projects with China and India.

The routine in Pakistan is to witness military leadership visiting Saudi Arabia. Former Army chief Raheel Sharif is actually heading a Saudi-organized international force against the “rebels” in Yemen allegedly backed by Iran. Tehran is careful with Islamabad despite a clash of policy in Afghanistan because of the Afghan Taliban during whose regime Iran had nearly gone to war with Afghanistan. Today, it is in a relationship of cooperation with Kabul while Pakistan is not. With China and India investing in Iran, we can get a measure of how Iran has avoided regional isolation while Pakistan has embraced it. It is for this reason that General Bajwa’s visit should be considered crucial.

The Pakistan Army must start focusing on Islamabad’s viability as an economy and closely watch the strategy followed by China, a superpower because of its economic, not military muscle. China has invested more in Iran than in Pakistan and India is poised to buy a gas-field there after which it will need to transport this gas to India. Pakistan has experienced the cost-difference in transporting gas from Qatar by sea and by pipeline from Iran, which is waiting to be connected with Pakistan.

Pakistan has a strategic position as far as its economy is concerned and can benefit only if it allows its median geographic position to enrich its economy. It has to start frontloading its relations with India with bilateral and transit trade instead of Kashmir if it wants to survive the current century.

Is this article written by an Indian? Rather than focusing on the Iran Pakistan implications of collaboration the author started discussing India & Kashmir!!!!