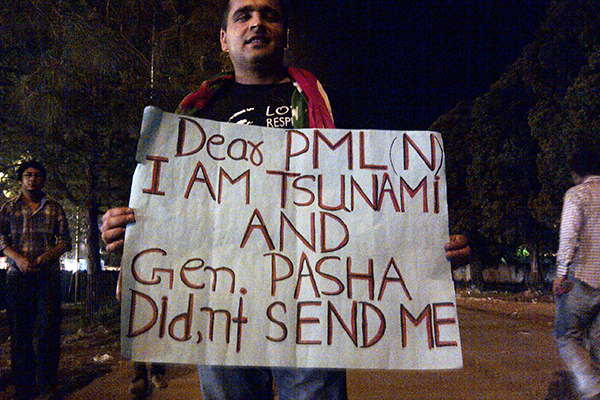 “Dear PML(N), I am tsunami and Gen. Pasha didn’t send me,” read a placard carried by a supporter of Imran Khan’s Pakistan Tehreek-e-Insaf at the party’s rousing campaign finale in Islamabad. To explain Khan’s rising popularity—especially after his historic Lahore rally in October 2011—the rival Pakistan Muslim League (Nawaz) has repeatedly alleged that Gen. Shuja Pasha, former chief of the Army’s Inter-Services Intelligence agency, had been boosting Khan’s party with financial and other support from the ISI. (The PTI denies this. And the PMLN has said Pasha’s successor is not engaged in shoring up Khan’s political fortunes.) But whatever Pasha may or may not have provided to the PTI, the reality is that Khan has legitimate, popular support, especially in urban Pakistan. The results from today’s elections will likely reflect that.