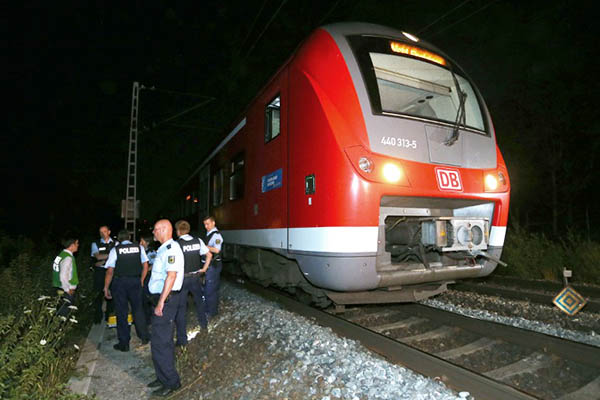 Refugee wounded three people in the likely jihadist attack before he was shot dead by police.

German police shot dead a 17-year-old Afghan refugee late Monday after he attacked train passengers with an axe and a knife, seriously wounding three people in what one official said was a “probable” Islamist attack.

Several other people were also injured in the assault on a regional train near the southern city of Wuerzburg, police said, adding that the teenager was killed as he tried to flee.

Joachim Herrmann, the interior minister of Bavaria state, said the assailant had arrived as an unaccompanied minor in Germany and was living in nearby Ochsenfurt. “It is quite probable that this was an Islamist attack,” said a ministry spokesman, adding that the attacker had shouted “Allahu Akbar” (God is greatest).

The attack happened around 9:15 p.m. on the train, which runs between Treuchlingen and Wuerzburg in Bavaria.

“Shortly after arriving at Wuerzburg, a man attacked passengers with an axe and a knife,” a police spokesman said. “Three people have been seriously injured and several others lightly injured.” Fourteen people were treated for shock.

He added: “The perpetrator was able to leave the train, police left in pursuit and as part of this pursuit, they shot the attacker and killed him.”

There were no further details on the circumstances of the teenager’s death.

Germany had thus far escaped the kind of large-scale jihadist attacks seen in the French city of Nice last week, in which 31-year-old Mohamed Lahouaiej Bouhlel used a truck to mow down people leaving a Bastille Day fireworks display, killing 84 people in an attack claimed by Islamic State.

In May in Germany, a mentally unstable 27-year-old man carried out a knife attack on a regional train in the south, killing one person and injuring three others. Early reports suggested he had yelled “Allahu akbar” but police later said there was no evidence pointing to a religious motive. He is being held in a psychiatric hospital.

Germany let in a record nearly 1.1 million asylum seekers last year, with Syrians the largest group followed by Afghans fleeing ongoing turmoil and poverty in their country. The number of refugees arriving in Germany has fallen sharply as a result of the closure of the Balkans migration route and an E.U. deal with Turkey to stem the flow.

In April, May and June, the number was around 16,000 each month, less than a fifth of the tally seen at the start of the year, according to official figures.

Bavaria is governed by the Christian Social Union (CSU), sister party to Chancellor Angela Merkel’s conservative Christian Democrats. The CSU has been loudly critical of Merkel’s welcoming stance toward asylum seekers, a split that threatened the unity of the ruling coalition in Berlin and sent the government’s approval ratings plunging.

It has also lent support to a rightwing populist party, Alternative for Germany, which was founded as a Euroskeptic protest party in 2013 but now mainly rails against Islam and Germany’s refugee influx. It currently polls at more than 10 percent and is represented in half of Germany’s 16 states as well as the European Parliament.

The attack in Bavaria is likely to revive political tensions.