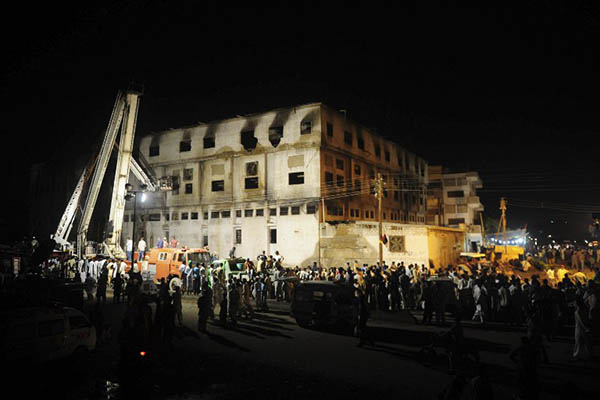 KiK has agreed to pay a total of over $6 million in compensation to the over 255 victims of Ali Enterprises fire from 2012.

German discount clothes retailer KiK has agreed to pay another $5.15 million in compensation to victims of one of Pakistan’s worst-ever industrial accidents, the company said in a statement.

The sum will come on top of the $1 million KiK paid out in late 2012 in the wake of the devastating fire at the Ali Enterprises factory in Karachi that killed at least 255 people, the company said.

“KiK has voluntarily taken on responsibility for those affected, because this aid was a real concern for us,” chief executive Patrick Zahn said in a statement published on the firm’s website on Friday.

KiK said the final compensation figure was agreed after months of talks with victims’ representatives, the International Labor Organization, the German development ministry and the Clean Clothes Campaign—which fights for improved working conditions in the garment industry.

In its own statement, the Clean Clothes Campaign (CCC) labeled the agreement a “landmark compensation arrangement.”

“It is a day of respite for the victims’ families as their cries have been heard,” said Saeeda Khatoon, vice president of the Ali Enterprise Factory Fire Affectees Association, in the CCC statement. “We know that our nearest and dearest will never come back, but we hope that this kind of tragedy will never ever happen again.”

The Ali Enterprises fire was one of a series of industrial accidents in recent years that have prompted Pakistan to review its industrial safety arrangements. After the Karachi fire, the European Parliament told big brands to re-examine their supply chains in Pakistan and demanded the creation of a new effective and independent system to monitor factories.

A judicial review into the blaze found that a lack of emergency exits, poor safety training, closely packed machinery and the failure of government inspectors to spot the faults all contributed to the heavy death toll. In January, the government in Islamabad acknowledged that the country lacked specific legislation to protect workers.