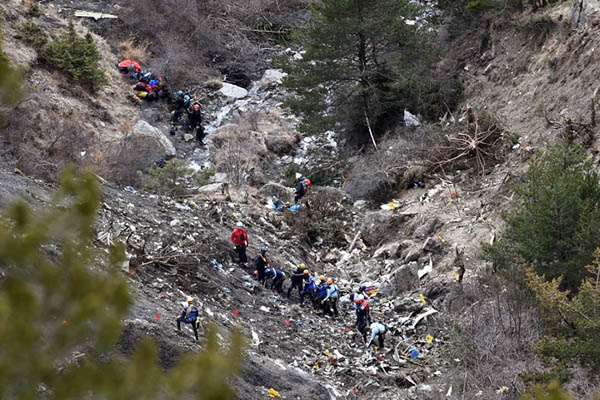 German daily claims captain of plane tried to use an axe to break into cockpit as plane started to descend.

The Germanwings co-pilot who flew his Airbus into a French mountainside, killing all 150 aboard, suffered serious depression, a German newspaper reported, raising new questions over how he was cleared to fly.

The black box voice recorder shows that Andreas Lubitz locked his captain out of the cockpit on Tuesday and deliberately sent Flight 4U 9525 into the Alps, French officials say, in what appears to have been an act of suicide and mass murder. Initial portraits of the co-pilot painted a well-liked man, a fitness fanatic who lived with his parents in a leafy, upscale street in the west German town of Montabaur. But a troubled man hid behind that guy-next-door image, said by German officials to be 27.

The co-pilot sought psychiatric help for “a bout of heavy depression” in 2009 and was still getting assistance from doctors, Bild daily said, quoting documents from Germany’s air transport regulator Luftfahrtbundesamt (LBA). He was still receiving “regular, individualized medical” treatment, Bild reported, adding that Germanwings’ parent company Lufthansa had transmitted this information to the LBA.

Lufthansa CEO Carsten Spohr said that Lubitz had suspended his pilot training, which began in 2008, “for a certain period,” before restarting and qualifying for the Airbus A320 in 2013. According to Bild, those setbacks were linked to “depressions and anxiety attacks.”

The pilot’s records were due to be examined by experts in Germany on Friday before being handed to French investigators, Bild reported.

German police combed for clues in an apartment Lubitz used with his girlfriend in Duesseldorf, but spokesman Marcel Fiebig told AFP on Friday there was no “smoking gun.” Searches were also made at his parents’ house. The street was cordoned off as officers wearing gloves emerged with boxes, bags and briefcases.

Lubitz locked himself into the cockpit when the captain went out to use the toilet, then refused his colleague’s increasingly desperate attempts to get him to reopen the door, French prosecutors say.

According to Bild, the captain even tried using an axe to break through as the plane was sent into its fatal dive by Lubitz. This could not be immediately confirmed, but a spokesman for Germanwings told Bild that an axe was standard emergency equipment on board the aircraft.

The tragedy has already prompted a shake-up of safety rules at airlines. British low-cost carrier easyJet was the largest company to announce a new policy requiring there always be two people in the cockpit. Similar announcements were made by the Canadian government, Icelandair and Norwegian Air Shuttle.

Germany’s aviation association BDL said it too wanted to introduce a two-person cockpit rule among its members, while Lufthansa said the measure would be discussed at an industry meeting on Friday.

Meanwhile, the U.N. world aviation body stressed Thursday that all pilots must have regular mental and physical check-ups.

German Chancellor Angela Merkel said the revelation that Lubitz was intent on crashing the plane added an “absolutely unimaginable dimension” to Tuesday’s tragedy, in which most victims were German and Spanish nationals. Spain’s Prime Minister Mariano Rajoy said he was “deeply shaken” by the news and sent his “heartfelt affection” to the victims’ families, dozens of whom had arrived near the crash site in France. They were briefed by the lead prosecutor, Brice Robin, who said they reacted with “shock” to the findings.

Robin said the passengers were killed “instantly” by the crash and were probably unaware of the impending disaster until the “very last moment.”

In the northwestern German town of Haltern, which lost 16 students and two teachers who were returning from a school exchange, the revelations caused shock and anger. “Personally, I’m stunned, angry, speechless and deeply shocked,” Haltern’s mayor Bodo Klimpel told a news conference. The shaken principal of the stricken school, Ulrich Wessel, said “what makes all of us so angry [is] that a suicide can lead to the deaths of 149 other people… It leaves us angry, perplexed, stunned.”

Investigators say Lubitz’s intention was clear because he operated a button sending the plane into a plunge.

The French prosecutor downplayed the likelihood of Lubitz accidentally taking the plane down with an involuntary turn of the descent button. “If you passed out and leaned over on it, it would only go a quarter-way and do nothing,” Robin said, adding Lubitz, who had worked for Lufthansa since 2013, had set the controls to “accelerate the plane’s descent.”

For the eight minutes after he began the descent, Lubitz was apparently calm and silent, breathing normally. “He does not say a single word. Total silence,” Robin said.

Lufthansa’s Spohr said there wasn’t “the slightest indication what might have led” to the Lubitz’s actions. The second-in-command had passed all psychological tests required for training, Spohr told a press conference, insisting: “He was 100-percent airworthy.”

Recovery operations at the crash site were ongoing, with French officials trying to find body parts and evidence. A second black box, which records flight data, has not yet been recovered.