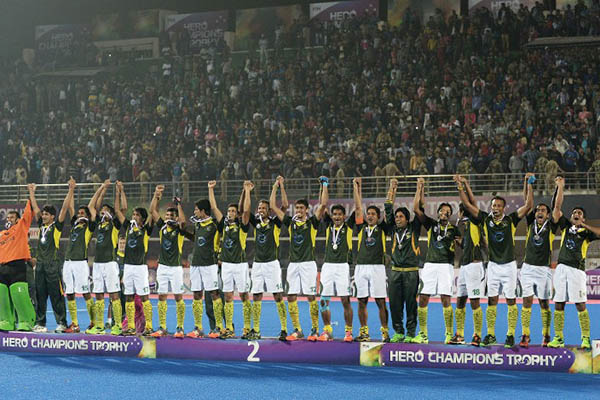 Olympic field hockey gold-medalists Germany added the Champions Trophy on Sunday with a 2-0 victory over Pakistan in a controversy-laden final in Bhubaneswar.

Pakistan had two players banned for the final and one reprimanded by the International Hockey Federation for making obscene gestures at the crowd after their 4-3 win over hosts India in Saturday’s semi-final. Muhammad Tousiq and reserve goalkeeper Ali Amjad were handed a one-match ban that sidelined them from the final of the eight-nation tournament. Shafqat Rasool was reprimanded for the same offence, the International Hockey Federation (FIH) announced after conducting a hearing with Pakistan coach Shahnaz Sheikh and the players earlier in the day.

“The above-mentioned players were seen making gestures that are considered to be obscene,” the FIH said in a statement without elaborating. The body had earlier cleared Pakistan of any wrongdoing.

In a statement issued by tournament director Wiert Doyer, the FIH initially said Sheikh had apologized for his team’s rude gestures towards the crowd. “I have spoken to Shahnaz and told him that the behavior of Pakistan players went beyond what is acceptable to standards of the FIH,” Doyer was quoted as saying in the statement. “Shahnaz has apologized and assured me that this behavior will not occur again.”

The subsequent U-turn led to furor on social media, with Pakistani fans accusing India of pressuring the FIH into punishing the team after losing the semi-final a day earlier. This belief was supported by the FIH move coming a few hours after Hockey India chief Narinder Batra demanded an unconditional apology from Pakistan and called for strict action by the governing body. “I am instructing my CEO to inform FIH that in case this kind of behavior by teams is within normal and tolerable limits of FIH, then we may not be interested to host any more tournaments in India,” Batra said in a statement. “The tournaments may be shifted to countries which tolerate this kind of nonsense and uncouth behavior.” India is due to host the 2018 World Cup.

Batra also threatened to severe all ties with the Pakistan Hockey Federation (PHF) unless they issued an unconditional apology. In a separate statement released by the FIH on Sunday, Sheikh issued a fresh apology on behalf of the PHF.

“The incident … contained behavior that is considered unacceptable to Pakistan Hockey Federation and the entire hockey fraternity,” he was quoted as saying in the statement. “As the result, I have spoken to my team and explained to them that they are guests in India and as hosts they have been very hospitable to the team.”

On Saturday, Pakistan edged out hosts India 4-3, winning the semi-final. Arslan Qadir was Pakistan’s hero, scoring his team’s first goal and also netting the winner 90 seconds from the end to silence a 7,000-strong Indian crowd at the Kalinga stadium. The crowd had been booing Pakistan’s team throughout the match, raising frustrations according to reports, and prompting them to let off steam when they finally emerged victorious. As the final hooter sounded, excited Pakistani players hugged each other, took off their shirts and waved them toward disappointed spectators in the stand. Some players also conveyed a rude gesture to the fans, as the booing continued despite the Pakistani win.

Later, during the final, Pakistanis on social media accused the FIH of favoritism after a German player made the same obscene gesture following their first goal. No action was taken against German Chris Wesley, nor did India raise any concerns, despite the virtually identical situations.

Some 7,000 Indian fans at the Kalinga stadium cheered wildly as the young Germans, with seven junior World Cup winners from 2013 in their side, won back the Champions title they took in 2007. The closest Pakistan came to scoring was early in the fourth quarter when a loose ball from the left caught the Germans on the wrong foot, but Muhammad Bhutta was unable to slot the ball in.

Pakistan coach Sheikh, who had walked out of the post-match press conference on Saturday after being pestered by Indian reporters about the so-called “unsportsmanlike” behavior of his players, praised his team after the final. “I am proud of my boys,” the former international said. “After a tough year both on and off the field, we did well to reach the final when our aim had been to finish among the top four. This defeat will not only hurt us but the entire subcontinent because both India and Pakistan need to catch up with the Europeans quickly.”

As a final sign of contrition, coach Sheikh and captain Muhammad Imran brought roses to an on-pitch media briefing following the loss to Germany. “We have already said sorry for what happened after the match against India and now we are here to present you this red rose,” the coach said.

Imran, meanwhile, told media that the Indian team has mistreated the Pakistani team after winning in the past. “We don’t want to raise that but I can tell you that Indian players too have treated us badly in the past. These things happen in an India-Pakistan game,” he said. “But we are here to bury the hatchet and this red rose is a sign of that,” he added.

Pakistan had failed to qualify for the World Cup in June that was won by Australia and were also unable to book a direct entry to the 2016 Olympics after losing to India in the Asian Games final in South Korea in October.

With the cash-strapped Pakistan Hockey Federation unable to generate funds to fly in the team to Bhubaneswar, it needed the generosity of a businessman at home to sponsor the trip.

Australia finished third after coming into the tournament as five-time defending champions. They defeated India 2-1 for the bronze medal. “I am pleased, but not satisfied,” Australian coach Graham Reid said. “We played tighter and better as the tournament progressed. Considering this was a learning curve, we’ve achieved a lot. But obviously we missed not being in the final,” he added.