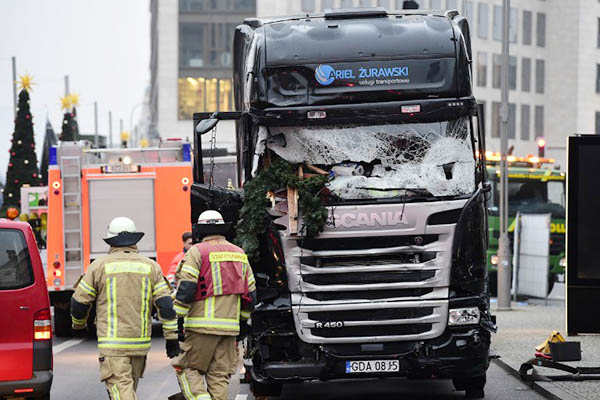 Officials say 24-year-old suspect had already been under investigation prior to deadly truck attack.

German authorities triggered a Europe-wide manhunt on Wednesday for a rejected asylum seeker suspected of involvement in a deadly truck assault on a Berlin Christmas market claimed by the Islamic State jihadist group.

Officials said the suspect, 24-year-old Tunisian national Anis Amri, had already been under investigation for planning an attack, in a development certain to fuel public outrage.

Asylum office papers believed to belong to Amri, alleged to have links to the radical Islamist scene, were found in the cab of the 40-ton lorry that rammed through the crowd, killing 11. The twelfth victim, the hijacked truck’s driver, was found shot in the cab.

Prosecutors released a European wanted notice with two photos of the dark-haired, brown-eyed suspect and offering a reward of 100,000 euros for information leading to the arrest of Amri, who they warned “could be violent and armed.”

Tunisian anti-terrorism police were questioning Anis’ family, a security official told AFP, as another source said he had been arrested several times in Tunisia for alleged drug use. He fled to Italy after the 2011 revolution that overthrew longtime dictator Zine El Abidine Ben Ali and spent three years there before traveling on to Germany, the source said.

“When I saw the picture of my brother in the media, I couldn’t believe my eyes. I’m in shock, and can’t believe it’s him who committed this crime,” his brother Abdelkader Amri told AFP. But “if he’s guilty, he deserves every condemnation. We reject terrorism and terrorists—we have no dealings with terrorists.”

The interior minister of Germany’s North Rhine-Westphalia state, Ralf Jaeger, said counter-terrorism officials had exchanged information about Amri, most recently in November, and a probe had been launched suspecting he was preparing “a serious act of violence against the state,” Jaeger said.

Prosecutors in Berlin later said that Amri was under investigation for allegedly trying to carry out a robbery to fund the purchase of automatic weapons, “possibly to carry out an attack with accomplices he still hoped to recruit.” But after keeping tabs on him from March until September this year, they failed to find evidence of the plot and stopped the surveillance.

Amri came to Germany in July 2015 but his application for asylum was rejected this June. His deportation, however, got caught up in red tape with Tunisia, which long denied he was a citizen. The required documents only arrived Wednesday, two days after the Berlin attack, said Jaeger.

A conservative lawmaker, Stephan Meyer, told reporters Amri was apparently “known to authorities and belonged to the Salafist-Islamist scene.”

A previous suspect—a 23-year-old Pakistani asylum seeker—was released late Tuesday for lack of evidence, prompting fears of a killer on the loose and further rattling nerves in a shocked country. Six of the dead have been identified as German while media reported one of the victims was an Italian woman.

Twenty-four people remain in hospital, 14 of whom were seriously injured.

The scenes of the attack revived nightmarish memories of the July 14 truck assault in the French Riviera city of Nice, where 86 people were killed by a Tunisian Islamist. The I.S.-linked Amaq news agency said “a soldier of the Islamic State” carried out the Berlin carnage “in response to appeals to target citizens of coalition countries.” There was no evidence to back the claim, nor did Amaq identify the perpetrator.

Germany is part of a U.S.-led coalition fighting I.S. in Iraq and Syria. Tunisia is one of the biggest sources of jihadist fighters, with some 5,500 of its nationals believed to be involved in combat in Syria, Iraq and Libya.

The Berlin attack comes at a delicate time for Chancellor Angela Merkel who is running for a fourth term in 2017 but has faced strong criticism over her decision last year to open the country’s borders to refugees. The case has inflamed the debate about asylum policy in general, and in particular the speed at which rejected asylum seekers can be deported.

Germany this year moved to declare Algeria, Morocco and Tunisia as safe countries of origin, to raise the bar for asylum requests after last year’s record influx of around 890,000 people. But the bill has been stuck in the upper house for months over human rights concerns in those countries.

A Polish man, killed with a gunshot, was found in the articulated truck’s passenger seat. The 37-year-old Pole named Lukasz worked for his cousin Ariel Zurawski’s transport company in northern Poland. Zurawski told Polish television he was a “good guy” and said his body showed signs of a struggle with the assailant or assailants including stab marks.

An autopsy indicated that the driver was still alive at the time of the attack, the daily Bild reported.

Europe has been on high alert for most of 2016, with bloody jihadist attacks striking Paris since last year and Brussels. In Germany, two attacks in July in the southern state of Bavaria were committed by asylum seekers and claimed by I.S.