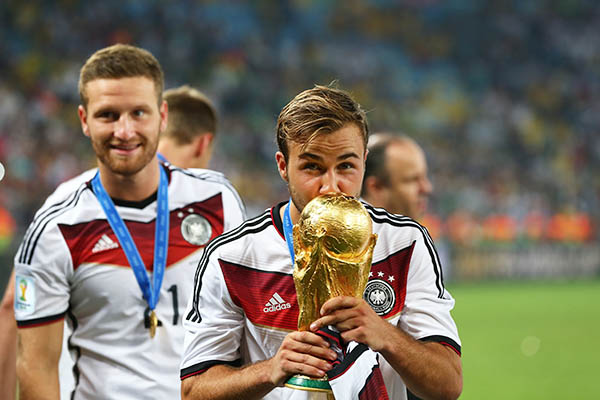 Germany have now won four World Cups, putting the European powerhouses just one behind Brazil’s record tally of five. “It’s unbelievable what we have achieved. Whether we have the best individual player doesn’t matter at all. You just need to have the best team,” said delighted Germany captain Philipp Lahm.

Germany coach Joachim Loew revealed he had encouraged Goetze to eclipse Argentina star Messi when he came on as an 88th-minute substitute. “I told Mario Goetze, ‘Go out and show the world you are better than Messi,’” he said.

Germany’s win sparked an explosion of joy in their homeland and in host nation Brazil, which had been dreading the prospect of South American rivals Argentina winning the title on its territory. Fireworks exploded across Berlin as more than 250,000 fans jumped for joy in the heart of the capital, many singing ‘Oh, it’s beautiful!’ and chanting ‘Super Deutschland!’

Tens of thousands of Argentine fans who had swarmed Rio’s Copacabana beach ahead of the game fell silent after the defeat as gleeful Brazilians partied. “Thank God, thank God that Germany won,” said Caio Ferraz, 45, a Brazilian looking up at the stars on the legendary beach.

The dramatic finale came after a month-long footballing carnival widely regarded as one of the best World Cups ever. Goetze’s winner equaled the record tally for goals at a 32-team World Cup. The 171 goals from 64 games equaled the number set in France in 1998.

Fittingly, Goetze’s strike was another memorable effort in a tournament brimming with spectacular individual goals.

A gripping final before 74,738 spectators, which included German Chancellor Angela Merkel, looked destined for penalties after both sides had failed to break through stubborn defending with the scores deadlocked at 0-0. But with just seven minutes of extra-time remaining, Andre Schuerrle burst clear down the left flank and crossed for Goetze.

The 22-year-old took the ball on his chest and then volleyed past Sergio Romero to spark delirium amongst Germans and Brazilians alike. With seconds remaining Messi had the chance to conjure an equalizer, but a difficult free-kick sailed high over the bar.

It was a bitterly disappointing end to the tournament for Messi, who was named player of the tournament despite the loss. But the prize was scant consolation for the 27-year-old four-time World Player of the Year, who had been keen to emulate Maradona by guiding Argentina to World Cup glory.

“The truth is it doesn’t interest me at this moment,” Messi said of the award. “We wanted to win the World Cup for all the people in Argentina and we couldn’t do it.”

Messi had also missed a good chance early in the second half when he dragged a low shot wide of German shot-stopper Manuel Neuer’s goal. It followed another gilt-edged chance wasted by Argentina striker Gonzalo Higuain in the first half, when, clean through on goal, the Napoli scuffed his shot off-target.

Argentina coach Alejandro Sabella was left ruing his team’s missed chances as he reflected on a final defeat that mirrored the South Americans 1-0 loss to West Germany in 1990. “They had more possession, but we had more cutting edge, more chances,” lamented Sabella. “When there are chances in a game that is so evenly balanced, you have to take them. We lacked a bit of efficiency.”

Sabella, meanwhile, defended the contribution of Messi, who failed to conclusively end the debate surrounding his position in the pantheon of football’s greats. “It is a very demanding tournament and it drains everyone physically,” Sabella said. “He is already among the greatest of all time.”

Messi’s failure to add his tally of four goals in the first phase helped ensure that Colombia’s James Rodriguez finished the tournament as top-scorer to win the Golden Boot with six goals. Messi was, however, awarded the Golden Ball for best player.

Germany’s Neuer won the Golden Glove award for the tournament’s best goalkeeper. The 28-year-old Bayern Munich player was presented with the award moments after the final whistle. “It is unbelievable, and an awesome experience,” said Neuer. “Germany are world champions. I don’t know how long we will celebrate, but we will go about it with big grins.”