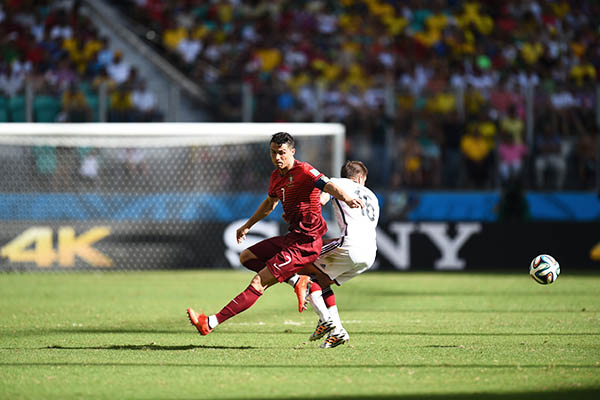 Portugal and Ghana lose in shocking upsets on fifth day of tournament.

Thomas Mueller scored a hat-trick in Germany’s 4-0 thrashing of Portugal on Monday to shatter Cristiano Ronaldo’s dreams of dominating the World Cup.

Bayern Munich star Mueller bagged the first treble of his international career as Germany, playing their 100th World Cup game, shrugged off a troubled build-up to make a flying start to the tournament.

The United States, meanwhile, shocked Ghana 2-1 in the day’s other Group G game, with American captain Clint Dempsey scoring after just 30 seconds. Iran and Nigeria fought a goalless draw in Group F, the first with no winner at these World Cup finals.

But it was a disastrous afternoon at Salvador’s Fonte Nova Arena for Ronaldo and Portugal, who had defender Pepe sent off for a first half headbutt on Mueller. Mueller opened the score from the penalty spot after 12 minutes. Defender Mats Hummels doubled Germany’s advantage on the half-hour mark. Mueller struck again at the end of the first half before tapping home a close range effort on 78 minutes. “It’s glorious to score three goals in a game like that,” said Mueller.

“That doesn’t happen every day, but I have had a good run at World Cups and I wanted to pick up where I left off,” added Mueller, who burst onto the international stage at the 2010 World Cup where he finished joint top-scorer with five goals.

A wretched outing for Portugal was compounded by the sight of Real Madrid defender Fabio Coentrao being stretchered off in the second half. The biggest concern for Portugal coach Paulo Bento will be the form of Ronaldo, who had hoped to sparkle at the World Cup after helping Real Madrid to the Champions League this season. The 29-year-old winger, who was battling injuries before the tournament, declared himself 100 percent fit on the eve of the match.

However, the former Manchester United star looked way below his best, and a poorly scuffed free kick summed up his afternoon of heartbreak. Ronaldo stormed past reporters after the match and refused to answer questions.

U.S. captain Dempsey scored the fifth fastest goal in World Cup history after just 30 seconds to give the Americans a dream start in the other group game in Natal. Ghana equalized in the 82nd minute through a spectacular Andre Ayew strike. But just when Ghana looked to have forced a draw, American defender John Brooks rose high to meet a corner and head home the winner on 86 minutes.

Brooks’ winner was sweet vindication for Jurgen Klinsmann’s selection policy. The tall defender was one of five German-born players controversially drafted into the squad by Klinsmann for the finals. The 21-year-old Berlin-born player—the son of a U.S. serviceman—represented Germany’s Under-20 side before deciding to pledge his allegiance to the United States in 2013. “We have a great spirit and fight until the last minute,” said Klinsmann.

“We’ve worked hard for this, so it’s a great feeling to get these three points. But it won’t mean anything if we don’t get out of the group. It was a grind but it was a wonderful one at the end of the day.”

Elsewhere, African champions Nigeria and Iran ground out a 0-0 stalemate in their Group F meeting in Curitiba. All 12 previous games had finished with a victory, which was the most dynamic start to a World Cup since the 1934 tournament.

Meanwhile, FIFA chiefs said they would tweak the goal-line technology system being used after controversy in Sunday’s game between France and Honduras. Karim Benzema’s strike in the Group E contest cannoned back off the inside of an upright across the goal at Porto Alegre’s Beira-Rio Stadium. Honduras goalkeeper Noel Valladares’ tried to scoop it clear but the GoalControl goal-line technology system signaled the ball had crossed the line, prompting Brazilian referee Sandro Ricci to whistle for a score.

The replay system shown in the stadium at first showed no goal when the ball hit the post and then a goal after it hit Valladares. The confusion infuriated Honduras manager Luis Fernando Suarez. “We are working to make it more clear. We will modify so you just see the ‘goal’ decision,” FIFA spokeswoman Delia Fischer said. “There were no mistakes yesterday. It all worked as planned. However we are working to modify it to make much clearer for fans inside the stadiums.”