Home News Galleries Getting Your Own Back

Getting Your Own Back 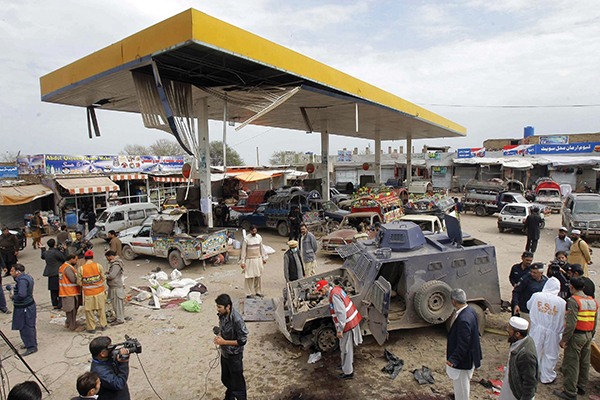 Pakistan Tehreek-e-Insaf has long held that violence in Pakistan is the direct result of U.S. drone strikes. As of press time, it had been well over 100 days since a drone attack but without a proportional reduction in violence. In quiet acknowledgement of this, the Peshawar government, led by the PTI, which is threatening to come apart, has enforced absurd new laws. The Sensitive and Vulnerable Establishments and Places (Security) Ordinance—which came into effect on Feb. 7 and whose shocking details have largely escaped press attention—appears to fault those who are targeted. It requires all “sensitive and vulnerable establishments and places”—which a government committee will identify—to make their own security arrangements or else face a year’s imprisonment or a fine of Rs. 40,000 or both. Three days earlier, on Feb. 4, Peshawar enforced the Hotels Restriction (Security) Ordinance, and the Restriction of Rented Buildings (Security) Ordinance. Both of these “counterterrorism” ordinances require hoteliers and landlords to inspect and scrutinize their guests and tenants, including for “hate and seditious material,” and report their findings to the police. The mixed signals are classic PTI. Khyber-Pakhtunkhwa is being turned into a police state, but without the one thing that such states guarantee: some degree of protection.

You are reporting a feburary story in april.

Newsweek editors are biased and criticise PTI for the sake of criticism ! We all know where their funding comes from !

More of a rant than a news beat or analysis. Nothing new. Smile n wave boys, smile n wave.