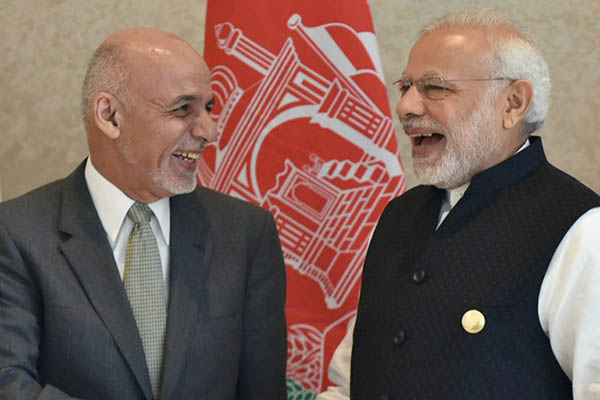 Afghan President Ashraf Ghani accused Pakistan on Sunday of waging an “undeclared war” and said Taliban insurgents battling his government would not last a month without sanctuary in the neighboring state.

Ghani also urged Pakistan to spend around $500 million pledged in aid for Afghanistan to tackle extremism instead. “Despite our intense engagement with Pakistan on bilateral and multilateral basis, the undeclared war… not only has not abated but also intensified during 2016 with special intensity,” Ghani said. “One of the key figures in the Taliban movement recently said if they didn’t have a sanctuary in Pakistan, they wouldn’t last a month,” he added.

The Taliban were toppled from power by a U.S.-led invasion in 2001 and have battled the Kabul government and its foreign allies since. Afghan officials accuse Pakistan of supporting the Taliban and continuing to provide sanctuaries on its soil in hopes of maintaining influence in Afghanistan.

The Afghan leader was speaking at the sixth ministerial conference of the Heart of Asia-Istanbul Process, a dialogue on ways to encourage security, political and economic cooperation among Afghanistan and its neighbors.

Delegations from more than a dozen countries including Pakistan, China, Russia, Turkey and Iran attended the conference in the Indian city of Amritsar on Sunday. They discussed challenges to the long-term growth and stability of the war-torn country.

India, the fifth largest bilateral donor to Afghanistan, has been a key supporter of Kabul’s government and has poured more than $2 billion into the country since the Taliban were toppled. Indian Prime Minister Narendra Modi on Sunday promised his country’s support for peace while also indirectly criticizing Pakistan’s role in the region.

“Terrorism and externally-induced instability pose the gravest threat to Afghanistan’s peace, stability and prosperity,” he said. “It [support for peace] must be backed by resolute action. Not just against forces of terrorism, but also against those who support, shelter, train and finance them,” Modi added, hinting at Pakistan.

The declaration issued at the end of the conference by the participating nations emphasized the need for a collective approach toward tackling terrorism in the region, particularly Afghanistan. “Acknowledging the support that terrorism derives in our region, we demand an immediate end to all forms of terrorism, as well as all support to it, including financing of terrorism,” the statement said, identifying several well known local “terrorist groups” including the Taliban, the Haqqani network, Al Qaeda, Lashkar-e-Taiba and Jaish-e-Mohammad, among others.

Both the Indian and Afghan leaders in recent months have vocally blamed Pakistan for its support for groups and individuals behind attacks in their countries. Pakistan—the historic backer of the Taliban—has long been accused of supporting the insurgents in Afghanistan, especially with attacks on Indian targets in the country. Last December Modi inaugurated Afghanistan’s new parliament complex in Kabul, built by India at an estimated cost of $90 million.

A few days after his visit militants launched a 25-hour gun and bomb siege near the Indian consulate in the northern Afghan city of Mazar-i-Sharif. And in March Taliban militants fired a barrage of rockets at the parliament complex.

In an earlier bilateral meeting Modi and Ghani discussed a range of issues including improved connectivity, trade, investment and terrorism.

Ghani, in his address on Sunday, said they had reached agreement on an air cargo corridor between the two countries. The strained ties between India and Pakistan have impeded any progress on land transport links between India and Afghanistan.

The two countries also recently signed a three-way transit agreement with Iran to develop the southern Iranian port of Chabahar. The deal, bypassing Pakistan to connect Iran, India and Afghanistan to Central Asia, is expected to boost economic growth in the region.