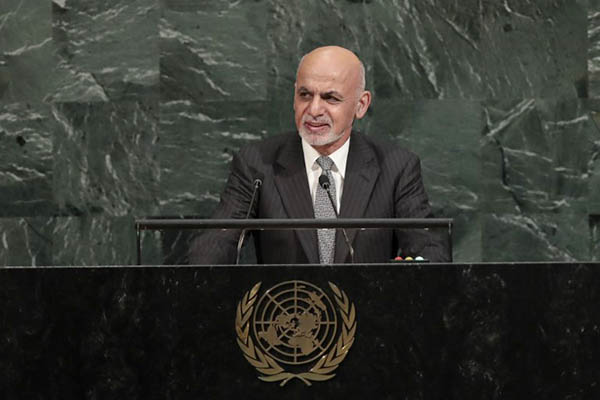 Afghan President Ashraf Ghani appealed on Tuesday to Pakistan to work together to curb extremists, seeing an opportunity as the United States sends in more troops.

Addressing the U.N. General Assembly, Ghani said U.S. President Donald Trump’s new Afghan strategy sent a signal to Taliban guerrillas that they cannot win on the field and must negotiate peace. “We welcome this strategy, which has now set us on a pathway to certainty. The Afghan people have looked to the United States for this type of resolve for years,” Ghani said.

Trump last month announced an Afghanistan strategy that reversed his previous calls to wind down America’s longest war, which was launched after the September 11, 2001 attacks. He instead has sent thousands more troops to Afghanistan and pledged a tougher line on Pakistan, which has long faced U.S. criticism for its intelligence services’ alleged ties with jihadists and for harboring Osama bin Laden.

“We now also have an opportunity for a dialogue with our neighbors on how we can work together earnestly to eliminate terrorism and contain extremism,” Ghani said. “I call upon Pakistan to engage with us on a comprehensive state to state dialogue on peace, security and regional cooperation leading to prosperity,” he said.

Pakistan has responded coolly to Trump’s criticism, with many Pakistanis noting that they themselves have been a major victim of attacks since their government sided with the United States following September 11. Analysts see Pakistan’s continued relationship with insurgents as part of a fixation on containing historic rival India, which has warm ties with Afghanistan’s post-Taliban government.