Ghost Migrants Eke Out Life on the Margins 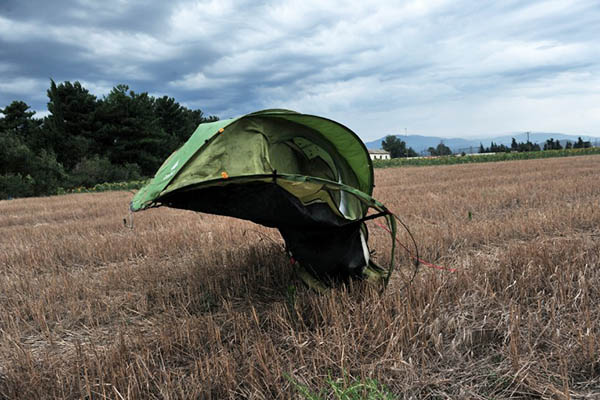 Inside the sleepy canteen of Idomeni, the Greek railway post on the border with Macedonia, the ring of a phone breaks the endless silence. Stratos, the manager, jots down the order: five portions of okra, three of chicken, four salads, 10 bottles of water.

There is no address. The delivery is made out to the wooded hills nearby—the home of a ghost community of migrants. There, amid the oak trees and the rocks and the hot dust, they bide their time in hiding, desperate to cross into Macedonia illegally.

A few months ago, Idomeni was a sprawling tent city of over 8,000 people sleeping in the muddy fields, yearning to be allowed to travel to northern Europe in search of safety and a better future. Most were Syrians, Afghans and Iraqis fleeing civil war, religious persecution and poverty. They had already made a perilous journey across the Aegean, where hundreds drowned last year, only to be stuck at the border in February when Macedonia and other countries further north barred them entry.

“We get calls and we take the food to four or five specific locations, not always the same area,” says Stratos, who is happy for the extra income as he has few other customers. He speaks no English or Arabic, but the calls come from a migrant who spent years in Greece and handles the language well. “Everything is in order, we even give out receipts. Only, sometimes the refugees don’t show up, fearing arrest by the police,” Stratos adds.

Greek police cleared Idomeni in May and still patrol the hills for stragglers. But when the camp was dismantled, thousands of the refugees and migrants had already moved out to avoid being taken to organized facilities.

Many prefer to roam the countryside, where they believe it is easier to come into contact with smuggler groups and purchase passage through unguarded border paths. Local shepherds say they frequently stumble onto groups of people hiding in the woods, or their food leftovers.

“They don’t walk on the roads but hide in the trees and bushes,” said a 70-year-old shepherd from the nearby village of Chamilo.

Signs of the migrants’ passage are easy to find among the trees: discarded sleeping bags, clothes, empty water bottles and diapers. In June, Macedonia President Gjorge Ivanov said smugglers had poked hundreds of holes in his country’s 50-kilometer razor fence on the border.

Dozens of people are caught sneaking every day and returned to Greece, a Macedonian army officer told AFP. “The number of illegal migrants that have been trying to cross illegally into Macedonia from Greece is 30 to 50 [on a daily basis],” he said.

The figures roughly concur with those given by Greek police. “Every day we intercept 50 to 200 people trying to reach the border,” says Ilias Bolos, head of police for the surrounding region of Kilkis. “We turn them back, and they return,” he adds.

A year ago, the migratory wave from the Balkans to Europe was at its peak. Each day, thousands would cross Greece’s frontier on the trail leading to Germany and Sweden, deemed the start of a new life free from oppression or poverty.

That mighty human flow is now a relative trickle, due to fences and controls within E.U. borders, and a deal with Turkey that has largely curtailed the arrivals of would-be asylum-seekers from Syria. Those who linger on Greece’s frontier are holdouts or stragglers—but they no longer dominate the headlines, and their desperation does not seem to wane.

Last week, Greek police arrested two truck drivers from Bulgaria who had 13 Afghans on board their vehicles, including nine children. They told police that six of the Afghans were heading for Serbia, where they intended to pay 1,000 euros each upon arrival. The rest wanted to go to Idomeni.

Others try to enter Macedonia by hiding beneath freight trains that pass from Idomeni—risking a grisly death on the tracks. “One day we found an Afghan family on a makeshift wooden platform lashed beneath a train wagon,” said an Idomeni railway employee. “The children were fastened on their parents’ bodies with ropes. It was shocking.”