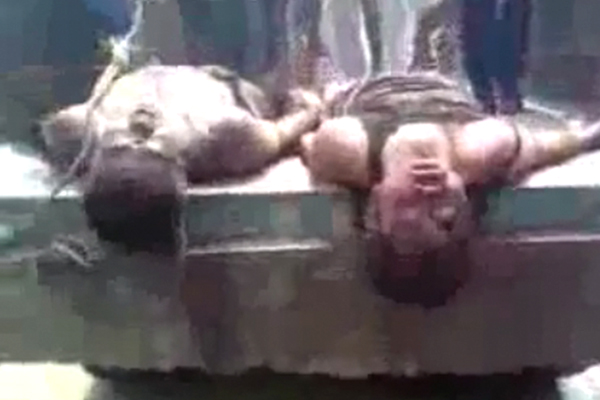 Murders that will haunt Pakistan.

They left their house after saying their morning prayers. A few hours later, the unrecognizably battered, bloodied, and lifeless bodies of both brothers were hanging upside down in front of emergency service Rescue 1122’s offices in Sialkot. The killings have shocked and outraged Pakistan, and are now a critical test for the country’s embattled politicians and recently independent judiciary.

Mughees Butt, 19, and Muneeb Butt, 15, were attacked by a mob of at least 50 shortly before 7 a.m. on Aug. 15. Their ordeal lasted at least an hour. Cellphone footage of the incident that has emerged is devastating. A handful of policemen are seen standing by as the brothers are mercilessly beaten with sticks and steel rods—their pleas for quick death unheeded. The attackers included young children who threw stones and shoes at the brothers as they were dragged across the asphalt. The bodies were ritualistically paraded on a flatbed truck, and then strung up. The brothers—educated, middle class—were said to have been mistaken for armed robbers. The real motive may have been a more mundane dispute over use of community cricket grounds.

The gory details of the killings have been highlighted, unvarnished, on private television channels demanding justice. The videos are far worse than the game-changing footage that appeared last year of the Taliban flogging a 16-year-old girl in Swat. That footage turned the tide of public opinion against the militants. Such episodes of vigilantism are becoming frighteningly common. Seven such murders took place in a single week in May 2008. Most recently, eight alleged robbers were stoned and beaten to death in Toba Tek Singh this May. Vigilante killings, which have also occurred in India, speak of the frustration Pakistanis feel toward a corrupt police force, which has been known to resort to mob-style executions, and a seemingly well-intentioned but bogged-down or frightened judiciary.

Politicians are showing perfunctory bereavement. Punjab’s chief minister, Shahbaz Sharif, and others have consoled the family on camera. His government has ordered the arrests of at least 30, including eight Rescue 1122 officials, and Waqar Chohan, a district police officer who allegedly oversaw the murders and claims that part of the footage featuring him is fabricated. Independent inquiries are being held by the Punjab government as well as the Supreme Court of Pakistan, but most believe the case will soon be forgotten. Some of the officials who were at the scene of the murders have already disappeared.

The call for justice for the brothers is rising. It is a call that politicians and judges may find difficult to ignore.