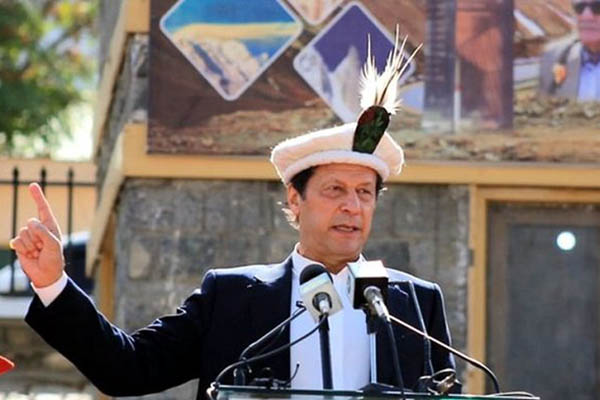 Prime Minister Imran Khan on Sunday announced that his government had decided to grant provisional provincial status to Gilgit-Baltistan, while keeping in view the relevant U.N. Security Council resolutions.

Congratulating the people of the region for this decision—which coincided with the 73rd Independence Day of Gilgit-Baltistan—he said that while he could not announce any specific development packages due to upcoming elections, his government’s focus had always been on the uplift of Pakistan’s backwards areas. “It is our government’s foremost policy to uplift Pakistan’s poor, 25 percent of the population, and the country’s backward areas,” he said.

The prime minister claimed that one of the reasons Gilgit-Baltistan had not prospered was because it was “cut off” from the rest of Pakistan, adding that in the coming days “our development plans will go there.”

It is unclear how the region will be made a separate province, as that would require a constitutional amendment with two-thirds majority from both Houses of Parliament, as well as the Pakistan-administered Kashmir Assembly.

In his address, Gilgit-Baltistan Governor Raja Jalal Hussain Maqpoon—a member of the Pakistan Tehreek-e-Insaf—claimed the incumbent federal government was making efforts to bring this region to the mainstream, adding that the provisional provincial status would only be granted after upcoming elections. He also criticized the opposition, claiming, without any proof, that they had opposed granting constitutional rights to Gilgit-Baltistan.

In his address, Prime Minister Imran Khan claimed that he had spent the past two-and-a-half years in striving to “set the economy on the right path,” and had now shifted his focus to the rule of law. “I will oversee state institutions myself so that powerful convicts trying to blackmail [government] are brought into the ambit of the law. You will see in the coming days whose legs shake and whose forehead sweats,” he said in a reference to PMLN leader Ayaz Sadiq’s speech in Parliament.

He claimed that the opposition’s criticism of the chiefs of the Army and Inter-Services Intelligence had proven he had appointed the right people to the posts; even though the Army chief was actually appointed by former prime minister Nawaz Sharif. “If these thieves [opposition] are speaking against them, it means they [chiefs] are the right people,” he claimed.

Reiterating that the opposition parties were “attacking state institutions” and “promoting enemies’ narrative,” he once again claimed anyone who sought to discredit the Army and judiciary was speaking “the language of Indian Prime Minister Narendra Modi.” The prime minister also reiterated his claims that the Modi government “hates” Muslims and that no other Indian regime had done to India-held Kashmir what the “extremist, racist, totalitarian” BJP-led government had done. This is why, he stressed, Pakistan needs a strong Army.

“There is no week when our soldiers do not sacrifice their lives. From our merged [tribal] districts to Balochistan and sometimes even in Karachi, planned terrorism is being carried out. Who is challenging them? … We know Narendra Modi’s government is trying to [sow dissent] not only through terrorism but also through Shia-Sunni conflict. They planned to spread chaos by killing Shia and Sunni scholars. I pay tribute to our Army that foiled these plans,” he said.

The prime minister also reiterated his claim that the opposition’s anti-government movement was launched solely to “blackmail” him, repeating, again, that he would never forgive them or give them an “NRO [National Reconciliation Ordinance].”

“The way in which they attacked the judiciary, they are trying to elevate one judge,” he said, referring to but not directly naming Justice Qazi Faez Isa, who the incumbent government had sought to implicate in a since-declared mala fide presidential reference. “The pressure on the Army is only there so that we [government] forgive them [opposition],” claimed Khan.